(RELEASE) - Rick Shiels, the world’s leading digital content golf presenter has formed an exclusive partnership with The Open ahead of The 147th Open Championship at Carnoustie, Scotland. 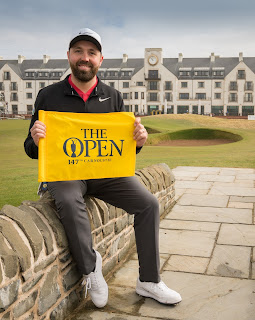 The partnership will see The Open and Rick create a series of exciting content at this year’s venue to give fans a unique look behind the scenes as the course prepares to host golf’s oldest Major for the eighth time.

The partnership will offer viewers an in-depth look at Carnoustie, with the online golf personality taking on iconic holes such as the infamous Par-3 16th, as well as taking a trip to the Barry Burn to revisit the site of one of the most dramatic finishes to an Open Championship in 1999. Constantly amongst the most-watched events on the sporting calendar, audiences will further familiarise themselves with the venue that’s witnessed some of golf’s biggest names triumph, including Tom Watson, Ben Hogan and Gary Player.

Since beginning his YouTube channel in late 2011, Rick has amassed over 280,000 subscribers and total social following in excess of 400,000. Dedicated to helping golfers improve their enjoyment of the game through product reviews, course reviews and tuition, Rick’s passion and personable style have seen him become one of the most watched golf presenters in the world.

Of the partnership, Rick said: “I’m thrilled to be working with The Open to help give viewers a different perspective on The Championship, Carnoustie and the events’ history. This is the one tournament that I always watched growing up as a kid and always wanted to be involved with, so to have the opportunity to create content with The Open is incredible. Working together we’ll be able to create some really unique content and give the golfing audience a unique perspective on the course, the event and its history, which is something I’m really looking forward to!”

For more information on The Open, visit: www.TheOpen.com.
Posted by Blogger at 11:15 AM