(Tarzana, Calif.) - Las Vegas teenagers Anna Haczkiewicz and Sydney Smith backed up their first-round 66 with a 4-under-par 68 on Sunday to claim medalist honors by two strokes. 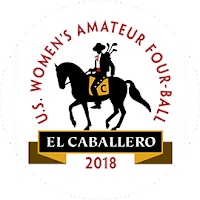 Quarterfinalists in this championship a year ago, the duo registered four birdies, an eagle and two bogeys on a cool and breezy day in the San Fernando Valley.

Their 36-hole total of 10-under 134 was two strokes shy of the 36-hole championship scoring record.

“Obviously we were trying to be the lowest competitors,” said Haczkiewicz, 17. “That is awesome to be top seeded.”

The graduating seniors – Haczkiewicz is headed to Brigham Young University in the fall and Smith, 18, will play for Colorado State – are one of 32 sides to qualify for match play, which begins on Monday. Last year the duo advanced to the quarterfinals.

“We have the same mentality [for match play],” said Smith. “We don’t focus on, Oh they made a birdie we have to make one this time. We just think every hole is a birdie hole, so we just keep looking to go lower [than our opponents].”

Although the side made its first two bogeys of the championship Sunday, Haczkiewicz balanced that with an eagle-3 on the 438-yard, par-5 fifth hole with a brilliant 6-iron approach from a sidehill lie to 20 feet.

The cut came at even-par 144 with three sides playing off late Sunday evening for the final two spots in the draw. Lauren Peter, 18, of Carmel, N.Y., holed out a 29-foot chip on the first playoff hole to secure a spot for her and Lindsay May, 18, of Auburn, N.Y. Former Kansas State teammates Katherine Gravel-Coursol, 24, of Canada, and Paige Nelson, 23, of Farmers Branch, Texas, made a par on the fifth playoff hole to grab the final spot.

Four sides finished at 8-under 134, including University of Arizona teammates Haley Moore, 19, of Escondido, Calif., and Gigi Stoll, 21, of Tigard, Ore. Moore is coming off a third-place finish in last week’s Pacific-12 Conference Championship in Seattle.

First-round leaders Yachun Chang, 17, of Chinese Taipei, and Lei Ye, 16, of the People’s Republic of China, carded a second-round 74 for a 36-hole total of 138, but still easily advanced to match play.

What’s Next:
The 32 sides who qualified for match play will play one 18-hole match on Monday. The matches begin at 8:30 a.m. PDT from the first tee. The winners advance to Tuesday’s Round of 32. The Round of 16 will be contested on Tuesday afternoon, with the semifinals and 18-hole final on Wednesday.

Notable:
Meghan Stasi, 39, of Ft. Lauderdale, Fla., registered a hole-in-one on the 192-yard eighth hole with a 4-iron. It was the second recorded ace in championship history for the four-time U.S. Women’s Mid-Amateur champion and Stasi’s fourth overall ace.

Avery Zweig, 11, of McKinney, Texas, is the youngest player to ever make match play in the U.S.  Women’s Amateur Four-Ball Championship, surpassing the previous mark of 13 the past two championships. Zweig is partnering with Malena Barrientos, 14, of Plano, Texas.

Six competitors who have advanced to the national finals of the Drive, Chip & Putt Championship qualified for match play. That list includes Leila Dizon, of Los Angeles; Kynadie Adams, of Nashville, Tenn.; Zweig; Alexandra Swayne, of Maineville, Ohio, and her partner, Sarah Willis, of Eaton, Ohio; and Abbey Daniel, of Covington, La.