(PHOENIX) – Joaquín Niemann, the world’s #1-ranked amateur since May 2017, has signed a multi-year equipment contract with PING, company President John K. Solheim announced. The 19-year-old Chilean turned pro after playing in his first Masters, having qualified by winning this year’s Latin America Amateur Championship. In 2017 alone, he took home seven trophies across the globe, including three at professional tournaments competing as an amateur. Since 2013, the man nicknamed “Joaco” has 22 victories across multiple continents. 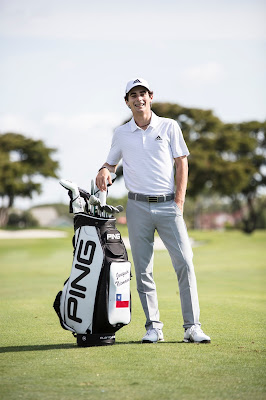 “Joaquín is an exciting young player who won virtually every prestigious junior title and then rose to be the world’s top amateur, so we’re proud to be associated with that level of talent and accomplishment,” Solheim said. “His skill is amazing, and he’s shown the consistency and dedication to separate himself. We’ve known Joaco for years, and to watch him play you can see why he’s been successful at every step in his journey. We look forward to supporting him as he pursues his goal to play at the highest level.”

Niemann has already accepted sponsors’ invites on the PGA Tour and will begin his pro career Thursday at the Valero Texas Open, and he will also play the Wells Fargo Championship, AT&T Byron Nelson and the Memorial. He will divide his time between the PGA and Web.com tours, with the goal of playing the PGA Tour full time.

Having had PING clubs for years, Niemann said he’s grateful to formalize the relationship. “PING has a great reputation and I like being associated with them because their technology allows me to play my best golf,” he said. “I have so much confidence in PING, and their people who’ve supported me are like family. They know my game really well and can make the necessary adjustments to get the most out of every round I play. Having the backing of PING means everything.”

In the bag, Niemann has a G400 LST driver, G400 3-wood and hybrid, iBlade irons, Glide 2.0 wedges, and a Karsten Anser 2 putter. As part of the multi-year agreement, he will carry a PING staff bag and play a minimum of 11 PING clubs, including a driver and putter. Niemann’s headwear will display PING branding.