Hacker is Back, and the Royal & Ancient May Never Be the Same

(RELEASE) - Yeoman House Books has announced that the newest edition of author James Y. Bartlett’s Hacker Golf Mystery series will be published July 1, 2018.  Death from the Claret Jug again features the adventures of golf writer Pete Hacker, who covers the game for his Boston newspaper. Hacker is in St. Andrews, Scotland to cover the Open Championship and finds there is trouble afoot in the Auld Grey Toon as an official with the Links Trust is murdered, and his body dropped into the depths of the Bottle Dungeon at St. Andrews Castle. 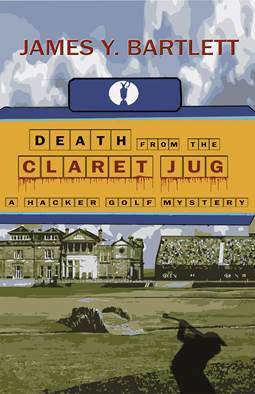 Whodunnit? The cast of suspects includes a flamboyant and controversial American resort developer with a history of run-ins with the Links Trust. But there’s also a professor at St. Andrews University who wants to ban golf entirely and disrupt the tournament; the Marquis Cheape, whose family has for generations held the title to the land beneath the famed Old Course; and some shadowy Russian figures who might be interested in a big business deal, or might just be interested in mayhem.

So while the world’s best golfers are battling the elements and the golf course to win the title of “Champion Golfer of the Year,” Hacker is chasing leads and clues from pub to pub on the narrow and twisting lanes of St. Andrews. And Hacker’s girlfriend, Mary Jane, is along for the ride on her first visit to Scotland.

Death from the Claret Jug is Bartlett’s fifth Hacker mystery. And along with the recent publication of Death in a Green Jacket, set at the Masters in Augusta, Ga., Bartlett has made the turn in his planned four-book Major series.

Bartlett has been called “the Dick Francis of golf” by Golfweek. Golf Today said “Clearly, [Bartlett] knows the nuances and dynamics of the golf world, but beyond that, he’s also a splendid storyteller.”

“Passages fall with the sweet sound of the ball rattling into the cup,” said a reviewer at the Atlanta Journal-Constitution.  “Romps right along…Bartlett knows how to tell a story,” was the verdict of the Boston Globe. “Hacker is blessed with a feisty cynicism, a critical eye and a sharp wit that makes him thoroughly enjoyable,” said On Course Living.

Death from the Claret Jug will be available in both trade paperback ($14.99) and e-book ($4.99) editions, and can be purchased from Amazon.com.
Posted by Blogger at 3:36 PM