(RELEASE) - Industry-leading ESPN The Magazine will celebrate its 20th anniversary this week by highlighting the 20 most dominant athletes of the past two decades. As announced on Sunday’s E:60 on ESPN, Tiger Woods clinched the No. 1 spot, as well as the cover of the Dominant 20 issue. 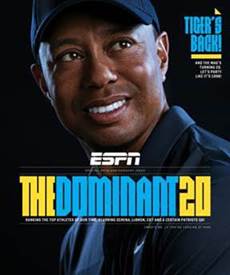 Senior writer Peter Keating developed a statistical methodology to determine the list of 20 dominant athletes: superstars who have proved to be the best at what they do over the past 20 years. The list is available in The Mag, on newsstands Friday, and on ESPN.com via a unique digital experience. There will be an accompanying piece for each athlete on the list as well as another ranking: the top 20 most dominant single-season teams of the last 20 years.

The Dominant 20 features several pieces from contributing writers including: the intangibles that make Peyton Manning great (by novelist and short-story writer Richard Ford), a fictional letter to Lionel Messi (by award-winning poet Roger Reeves), a poem about Cristiano Ronaldo (by author Natalie Diaz), and a look at Novak Djokovic’s 2011 career-defining forehand winner (by author Nathan Hill).

“For 20 years, ESPN The Magazine has been home to the best sports journalism in the country, whether by elevating significant pieces by giants in the industry or introducing fans to new writers, photographers and artists. We have a team that is equally passionate about sports, storytelling and the kind of intense debate and conversation that takes place among true fans,” said ESPN The Magazine editor-in-chief Alison Overholt. “From the very first issue of The Mag, we proclaimed that we had 'NEXT.' That forward-looking DNA infuses all that we do, and as we navigate an ever-changing media landscape, it continues to be the core of our identity—whether that means ensuring our immersive long reads are great experiences at the ready, on whatever device fans reach for, or whether that means being playful with ideas and formats that drive content for our colleagues on other platforms across ESPN. I’m so proud of this team and of the creative energy that they embody every day. I hope that fans enjoy taking some time to celebrate with us; it has been two decades of dominance, for the Dominant 20 athletes in the pages of this special anniversary issue, and for those of us at ESPN The Magazine who have had the privilege to chronicle their achievements these past 20 years.”

Additionally, the team from E:60 will create a prime time special “ESPN The Magazine: 20 Years” that will air Thursday, March 22, at 8 p.m. ET on ESPN. Hosts Bob Ley and Jeremy Schaap will be joined by Alison Overholt and Peter Keating to count down The Mag’s lists of the 20 most dominant athletes and teams of the past two decades.
Posted by Blogger at 10:26 AM