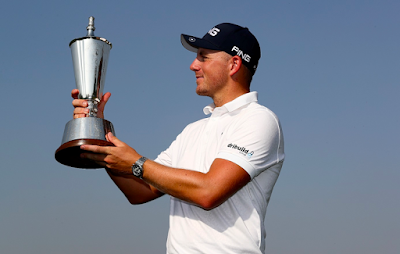 The 27-year old from Hillingdon, England, marked the start of the partnership with his career biggest win at the Indian Open last weekend. Matt won over fellow Dream Team member Andrew “Beef” Johnston, who is back in shape after a tough year last year. After the two Englishmen finished 11-under par in regular play, the par-5 18th hole at the DLF Golf and Country Club made the difference in a dramatic play-off. Matt ultimately secured the trophy with an impressive birdie on the first extra hole.

Thanks to his second win on the European Tour, Matt joins the top-100 of the Official World Golf Ranking. After six victories on the Alps Tour in 2016 and his first European Tour title at the Open de Portugal in 2017 as Challenge Tour member, the rookie proved his strength early on in his first full season on Europe’s main professional tour.

“I’m over the moon to team up with Audemars Piguet”, said Matt. “I’m really fascinated by what the brand stands for. They are always pushing the boundaries in their domain, just like what I tried to do on that tough course over the last four days!”

Audemars Piguet Chief Executive Officer François-Henry Bennahmias, welcomed Matt to the family: “We are extremely proud to support such a promising talent like Matt. His hard work is already paying off and we are so excited with his latest achievement. I’m sure we will hear a lot more from this young gentleman and with such a great start I dare him to win at least twice again before the end of the year!”