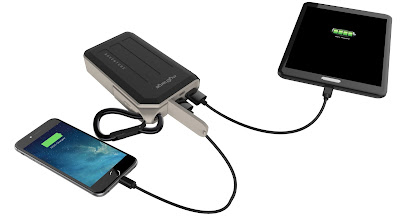 (RELEASE) - myCharge is electrifying the outdoors with the introduction of its new Adventure series chargers. The Adventure series ranges from chargers that can easily be carried in a pocket or attached to a backpack with the built-in carabineer to a heavy-hitter that can run televisions and charge laptops and drones. 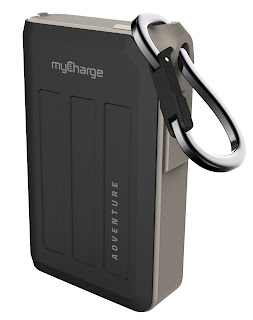 The AdventureUltra is myCharge’s largest battery bank with the highest power output. Designed to replace the heavy and bulky generators used when tailgating or camping, the AdventureUltra is a more streamlined power source option that can run a 42-inch television for up to three hours. The compact device weighs 1.05 pounds and measures just 1.2 X 5.8 X 4.1 inches. The AdventureUltra has a maximum power output of 45 watts, enough to run a fan or recharge a drone battery. It can also be used with 2 in 1 laptops and new laptops, such as the 12-inch Macbook, that require less than 45 watts either when powered off and solely charging or when powered on and charging simultaneously.

Pack-sized chargers for smartphones, tablets and other small gadgets are also available in the new Adventure series. Capable of storing between 3350 and 1o,050 mAh of power, these chargers feature a built-in carabineer and can be connected to devices using any smart watch, digital camera, phone, or tablet cable. Tough yet easily portable the line includes the: blue AdventureMini has one USB port (3350 mAh), while the orange AdventurePlus (6700 mAh) and grey AdventureMax (10050 mAh) feature two USB ports and can charge multiple devices at the same time.