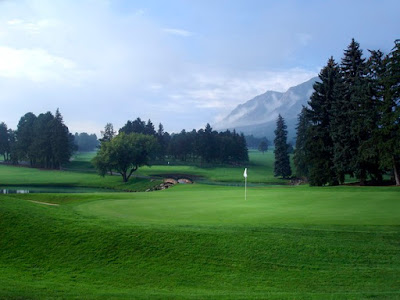 The historic resort tees up the 2018 U.S. Senior Open Championship with a refresh for the future while honoring its storied past

(Colorado Springs, Colo.) – Set in the foothills of the Rocky Mountains The Broadmoor Golf Club in Colorado Springs is celebrating 100 years of golf legacy. Boasting a new look honoring its golf legends and a new golf-resort restaurant featuring Broadmoor menu classics and modern tastes all accented with stunning mountain views. The historic property’s golf club is set to host the 2018 U.S. Senior Open June 25-July 1, which will continue the resort’s centennial summer celebrations.

Ranked among the best in the world, the property’s championship courses were designed by some of golf’s most notable names such as Donald Ross and Robert Trent Jones, Sr., and have played host to numerous national tournaments, including the U.S. Women's Open and PGA Cup. Presidents, politicians, celebrities, and many of the game’s greatest athletes have all played at The Broadmoor.

To tee-off its 100th season this spring and just in time to host the U.S. Senior Open, the Broadmoor’s Golf Club will unveil its renovations featuring a new welcoming lobby area with a Golf Heritage Hallway displaying the club’s legendary history on its walls. Guests can enjoy a series of displays, photos and exhibits that the highlight the rich traditions, the tournaments, and the champions who helped write the pages of the Broadmoor Golf’s historic legacy. It’s here where guests can learn all about why the Broadmoor’s courses are rated as some of the best in the world and enjoy snapshots from the Broadmoor’s game-changing victories such as Jack Nicklaus’ win over Charlie Coe in the finals of the United States Amateur Championship in 1959 and Annika Sorenstam’s breathtaking 1-stroke victory over Meg Mallon in the 1995 U.S. Women’s Open. For the past 100 years, The Broadmoor Golf Club has had some of the most legendary names in the sport claim their fame or reinforce their standing at The Broadmoor, including James “Long Jim” Barnes, James “Jimmy” Gullane, Ed Dudley, Dow Finsterwald, Babe Didrikson Zaharias, Judy Bell, Juli Inkster and Annika Sorenstam.  This year’s U.S. Senior Open will add more names to the list.

The Broadmoor’s newest restaurant, The Grille, which is located in the golf building, will also open this spring for golf members and hotel guests. The Grille takes dining to a new level with a menu that brings back some of the The Broadmoor’s classic dining favorites in a reimagined space that inspires not only with its restaurant design, but also with an exquisite, classic bar, and Colorado mountain views.

Since 1918, The Broadmoor has had a special place in the world of golf. And now, 100 years later, the Broadmoor Golf Club celebrates its centennial with a new look which proudly displays its legendary history and readies itself for another round of champions and memories to frame on its walls.

To learn more about the Broadmoor’s golf history, U.S. Senior Open, and centennial celebrations and events visit broadmoor.com and plan your great golf escape.
Posted by Blogger at 8:48 AM