(DURHAM, N.C.) – Old Chatham Golf Club, the top ranked golf course in North Carolina’s Raleigh, Durham, Chapel Hill Triangle area, showed off the excellence of its No. 1 ranked green complexes and overall course conditioning in a highly unusual way this past week, with three holes-in-one in one day.  What made this even more impressive is that the course was set up for the final day of the Club Championship with tough hole locations. 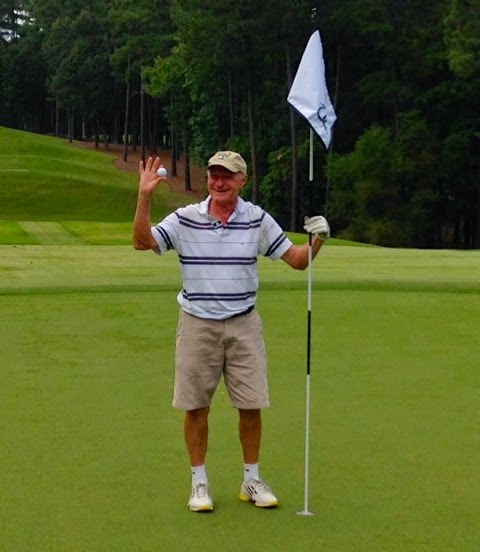 Tony Tata, secretary of the North Carolina Department of Transportation and James McNamara, M.D., Duke School of Medicine professor of neurosciences and director of the Center for Translational Neuroscience, were not playing in the same foursome, however they did ace the same hole within an hour of each other on Sunday.

“It’s my first ever hole-in-one,” said Tata, speaking of his 156 yard uphill shot with a seven iron on hole No. 7, which he hit while playing with his wife Jodi and friend Paul Chou. “It’s incredible!  I’ve played a long time, and never thought I would make a hole-in-one.”

An hour later, Dr. James McNamara made his hole-in-one on the seventh hole with a solidly struck six iron, while playing with friends Mary and Ted Moore. Said McNamara of his accomplishment, “There is hope for all golfers. I had to wait a long time for this!”

Chris Martin, senior product manager at Salix Pharmaceuticals, was playing in the Club Championship on Sunday morning with fellow member Chris Rice when he aced the challenging seventeenth hole from 195 yards with a five iron. This was Martin’s third hole-in-one.

A fourth hole-in-one came six days later, at the beginning of the three-day North Carolina Mid-Amateur Championship on Friday, Sept. 19.  This tournament showed how challenging the course is even to top players, with only four of the 125 competitors shooting under par.

“The series of holes-in-one is very exciting for us, as we have about 10 holes-in-one a year at Old Chatham, but never three on the same day or four in such a short period of time,” said John Marino, director of operations at Old Chatham. “It is remarkable for something this unique to happen, and we want to congratulate all four golfers on their achievements. To celebrate, we will give each golfer the flag of the hole they made their shot on and share this with all our members. We hope to see and celebrate more holes-in-one in the future.”

“We have had a lot of great feedback on the quality of the Champion Ultradwarf Greens that were installed in 2012, however, this is the best possible kind of feedback - that when a player hits a perfect shot and the greens are rolling so true, the ball disappears in the cup. We are proud of the players who hit the shots and the course conditions our course maintenance team has worked so hard to create,” said Brian Powell, head golf course superintendent at Old Chatham and president of the Carolinas Golf Superintendents Association (CGSA).

For more information on perfecting your hole-in-one odds at Old Chatham, visit www.oldchathamgolf.org.
Posted by Blogger at 2:46 PM