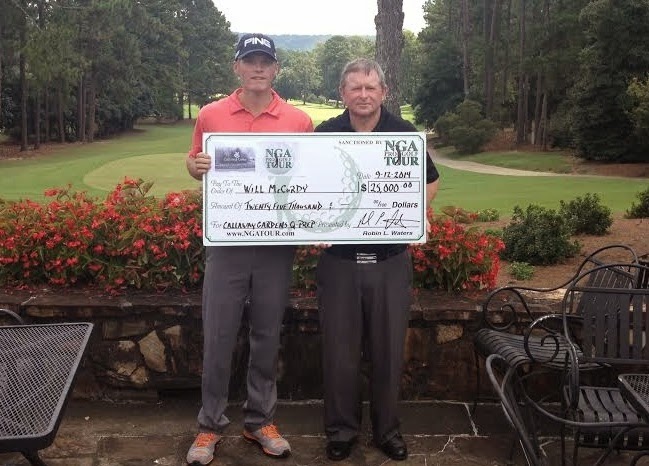 (Pine Mountain, Ga.) – 2013 NGA Tour Rookie of the Year  runner up Will McCurdy went into the final round of the NGA Callaway Gardens Q Prep event looking for the biggest payday of his brief professional career, a $25,000 Guaranteed first place prize. In order to do so, however, the former Auburn University star would have to best an all-star field also looking to grab one of the biggest paydays in developmental golf this year. After rounds of 67 and 66, McCurdy found himself tied for the lead with former University of South Carolina star Kyle Thompson, a past Web.com Tour winner, and a shot better than former Web.com Tour member and Kentucky alum Andy Winings.

The Auburn, Ala. native showed he could handle the pressure as he shot the second best round of the day 66 on his way to a two-shot win over fellow Auburn alum Patton Kizzire. Kizzire, who had just won the NGA Tour’s largest payout of the season $30,000 at Woodcreek Farms two weeks earlier, had the best round of the day 65 and made the jump from 5th to 2nd. Thompson, who shot two under par his final round, finished tied for third with Middle Tennessee State alums Hunter Green and Rick Cochran III, a final four contestant on Golf Channel’s Big Break Greenbrier. Winings also shot a final round two under par 70 and finished tied for 6th with Orlando native Yong Joo. Georgia natives Billy Shida and Jay McLuen rounded out those making the cut finishing 8th and 9th respectively.

McCurdy’s solid play began before the event even got started. “I played some practice rounds with some really good players and there were a lot of birdies being made,” stated McCurdy, “so I figured I needed to keep that pace if I wanted to do any good.”

The birdies came early and often for McCurdy as he posted three sub-70 rounds and 67, 66, and 66. Even the one time he was challenged during play, McCurdy turned a negative into a positive. “I got into trouble one time (on Thursday) and ended up chipping in for birdie”, explained McCurdy, “It’s just one of those breaks that goes your way if you’re going to win a golf tournament.”

The win bodes well for McCurdy as Callaway Gardens will also play host to his 1st stage site of Web.com Tour Qualifying School in October. During his post win interview McCurdy gave shout outs to Ping for his equipment, Titleist for his balls and gloves, and his family, friends, parents, girlfriend, and special friend/sponsor who preferred to remain nameless for all their support.