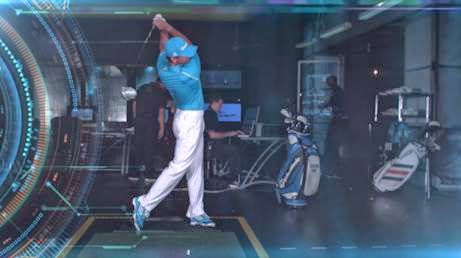 (Carlsbad, Calif.) – TaylorMade-adidas Golf, an industry leader in innovation, technology and performance footwear and apparel, has released the third episode in their “adidas Golf Innovations” video series. In the new episode, adidas Golf Tour staff professional Jason Day is put through a series of scientific experiments to analyze how fatigue and foundation affect a golfer’s performance, highlighting the performance benefits of the all new adizero one against traditional golf footwear.

To demonstrate how the proper footwear can affect swing consistency and performance, Day and John Brenkus examine the weight and traction properties of the adidas Golf adizero one, analyzing performance data on pressure plates throughout Day’s swing to evaluate how foundation and weighting impact his performance.

The adizero line has been specially-engineered from the ground up to include only what’s essential for peak performance and delivers everything a golfer needs to finish strong when it’s needed the most, delivering more stability than ever before in the lightest cleated performance golf shoe the company has ever created at under 10 ounces.

Brenkus, six-time Emmy Award winner, creator of "Sport Science" and New York Times best-selling author of "The Perfection Point", hosts the series that brings the science behind each innovation to life. Tested both with and without the new apparel and footwear for consistency and accuracy, the performance of our Tour pros captured in the series is closely measured and compared by highly advanced data capturing tools and is presented graphically through a series of unique and engaging videos – one for each of the six key technologies to be unveiled by adidas Golf throughout 2014.

Click here to view the third of six videos on adidas Golf’s YouTube page. To learn more about adizero one, visit adidasgolf.com and follow @adidasGolf on Twitter for information on future release dates of the innovations video series.
Posted by Blogger at 2:07 PM