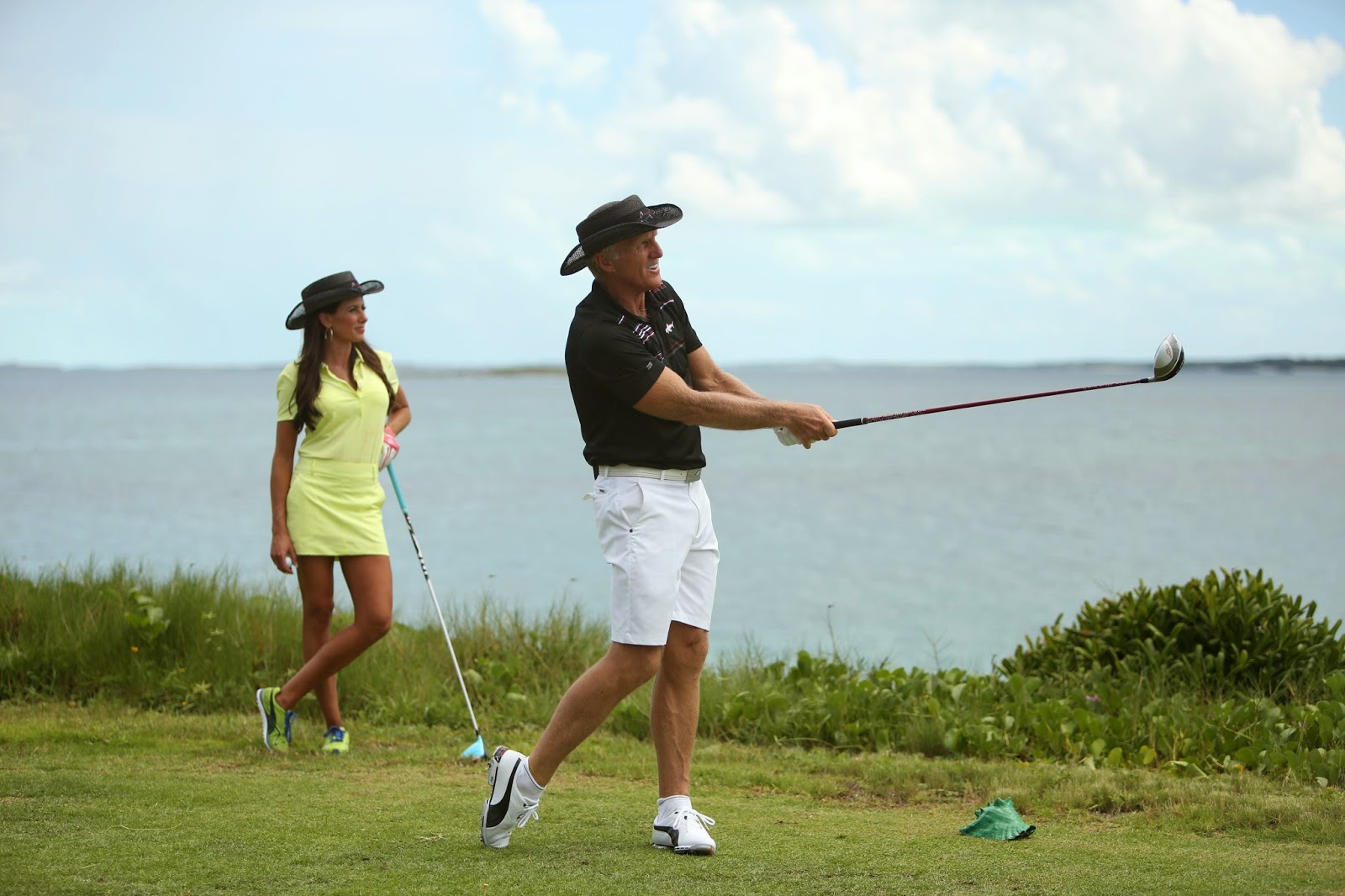 (ORLANDO, Fla.) – Playing Lessons, Golf Channel’s instruction series hosted by Holly Sonders returns for a new season, premiering April 29 at 7 p.m. ET with World Golf Hall-of-Famer Greg Norman. With episodes expanding to an hour, the new season kicks off with the Shark, as he and Sonders board Norman’s private plane bound for Sandals Emerald Bay Golf Club in Great Exuma, Bahamas. While walking the course that he designed, the Aussie shares the keys to a swing that guided him to a Hall-of-Fame career, and discusses his own dramatic experiences in the majors.

Norman joins a lineup of guests that include PGA TOUR stars Jonas Blixt, Billy Horschel, Matt Kuchar, Jimmy Walker and Lee Westwood, as well as LPGA Tour stars Sandra Gal and Jessica Korda, among others. Sonders takes viewers inside the ropes and inside the minds of the game’s most elite players through a one-on-one conversation and practice round as the pros offer swing tips and advice on shot selection and course management. In addition to providing instruction insight from tee-to-green, the pros reveal some perspective on their lives away from the course.

“This season on Playing Lessons we’ll give viewers an up-close perspective of proven winners, who are armed with a wide variety of tips and advice for the amateur golfer to apply to their own game,” said Sonders, who also serves as a co-host for Golf Channel’s Morning Drive and School of Golf programs. “In each episode, I strive to give viewers the opportunity to walk the fairways alongside some of golf’s biggest stars to not only get a lesson on how they strategically make their way from tee to green, but also to learn about their personalities and lives outside the ropes that isn’t often seen on TV.”

The new season will feature 16 episodes, each including a series of rapid-fire questions for the featured player, including: an ideal foursome, the one shot that keeps him or her awake at night, and the best golf joke or funny story. Each guest also is challenged to a friendly competition. If the pro wins, Sonders is faced with a wide range of scenarios (i.e. shining Kuchar’s shoes, enlisting as a flight attendant on one of Norman’s private excursions, and eating an unusual Swedish dish from Blixt).
A new element debuting this season will showcase Golf Channel analyst Brandel Chamblee offering in-depth evaluations of each pro’s swing, incorporating graphics and animation to provide the viewer with comprehensive analysis. Chamblee also will present a historical perspective on each swing, examining its roots and citing examples from current and former players as a basis of comparison.

2014 Playing Lessons Episode Schedule
April 29: Greg Norman
Course: Sandals Emerald Bay Golf Club, Great Exuma, Bahamas
In the season premiere, Holly Sonders and Greg Norman board a flight to the Bahamas to tee it up at one of the Shark’s favorite courses he designed. Norman shares the secrets to his game that were instrumental in shaping his Hall-of-Fame success, and the two discuss the Shark’s major championship triumphs and shortcomings.

May 13: Matt Kuchar
Course: The Vintage Club, Indian Wells, Calif.
Coming off a victory at the RBC Heritage, Matt Kuchar joins Sonders to provide the keys to his consistent approach on TOUR, and how he continues to succeed with such an unconventional swing. Kuchar also discusses his best wins to date, admits to a practical joke played on Tiger Woods at the 2013 Presidents Cup Opening Ceremony, and offers perspective on family time away from the course.

May 20: Billy Horschel
Course: Ritz-Carlton Golf Club (Grande Lakes Orlando), Orlando, Fla.
One of the  more excitable and passionate players on the PGA TOUR, Billy Horschel discusses the golf skillset that helped him become a four-time All-American at the University of Florida. Horschel also looks back on his dramatic victory at last year’s Zurich Classic of New Orleans.

June 3: Jessica Korda
Course: Ritz-Carlton Members Golf Club, Bradenton, Fla.
One of the best up-and-coming Americans on the LPGA Tour, Jessica Korda provides insights on her short game and ball striking. The 20-year-old and two-time winner also talks about her journey that has translated into her becoming one of the best young players in the game.

June 17: Lee Westwood
Course: Old Palm Golf Club, Palm Beach Gardens, Fla.
A three-time European Tour Player Of The Year, Lee Westwood joins Sonders at his home course of Old  Palm Golf Club to offer his keys to pure ball striking with irons, how to improve driving, and the steps to building a swing from the ground up. Westwood and Sonders also duel it out in a flop shot challenge.

June 24: Jonas Blixt
Course: TPC Sawgrass (Stadium course), Ponte Vedra Beach, Fla.
Developing a reputation as one of the best putters on TOUR – Jonas Blixt – runner-up at this year’s Masters, welcomes Sonders to his home course of TPC Sawgrass. The young Swede provides tips to making putts, the tools necessary to develop a reliable short game, and how to drive it like a TOUR player. Sonders also challenges Blixt to a closest to the pin contest at the famed 17th island-green par-3.

July 1: Sandra Gal
Course: The Golden Bear Club, Windermere, Fla.
One of the most talented European players on the LPGA Tour, Sandra Gal offers advice on how to hit it long and straight, and shares two simple steps to become a great putter. Gal also talks about life away from the course, and the future of the game.

TBA: Jimmy Walker
Course: Cordillera Ranch Golf Club, Boerne, Texas
Already a three-time PGA TOUR winner in the 2013-2014 wraparound season, Jimmy Walker welcomes Sonders to his home course of Cordillera Ranch outside of San Antonio. Walker discusses all things instruction, including the changes he chose to make with his own game that helped him go from a relatively unknown professional to a PGA TOUR star, as well as his outlook on the Ryder Cup.

For more information: GolfChannel.com
Posted by Blogger at 8:59 AM