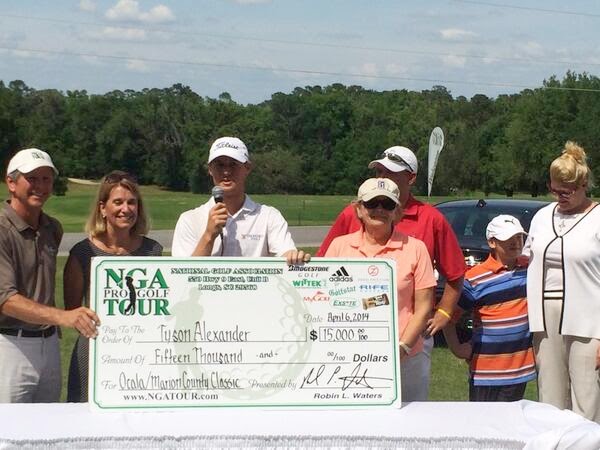 Bozzelli win streak comes to an end with T8 finish

(Ocala, Fla.) – Former University of Minnesota star and Web.com Tour member Clayton Rask put on a dominant performance at the 2014 Ocala/Marion County for 68 holes and then came the 541 yard par five 15th hole on Sunday Final Day. Rask, who made birdie on the hole the previous three rounds, made bogey and opened the door for a threesome only two strokes behind him to catch even. And catch even they did as University of Florida alum Tyson Alexander, Ohio State alum Jamison Sindelar, and University of North Carolina alum Dustin Bray all birdied 15 to draw into a four way tie for the lead. Then, when it looked like we were heading toward an exciting finish or probable playoff, Alexander ended all the speculation with one shot, as if to say no one comes into my backyard (or perhaps “swamp” would be more fitting for the former Gator standout). Standing in 17 fairway, Alexander hit an approach shot that took 2 bounces before it found the hole for an eagle, giving him a two shot advantage over his fellow competitors. Neither Bray, Rask, nor Sindelar could do better than par on the final two holes, finishing in a three way tie for second. Alexander secured his second Pro Series win in three seasons after sinking his par putt on 18. With the win, Alexander also earned the NGA Tour exemption into this year’s Web.com Tour News Sentinel Open to be held August 14-17 in Knoxville, Tenn.

Perhaps the biggest story coming into the week was the amazing run by rookie star Dominic Bozzelli, who had astounded everyone by winning the first 3 full Pro Series events of the season, and was searching for his 4th to match Andrew Morse as the only other player to win 4 Pro Series events in a row. Bozzelli had matched Zach Johnson, who managed three consecutive wins during his 2001 Player of the Year season, and was chasing Morse who pulled the feat in 1996. Despite a solid week of steady play that saw him shoot rounds of 70, 70, 70, and 69, Bozzelli was never able to turn it on and go low low like he had the previous three events and finished in a four-way tie for 8th at 9 under par with Mike Van Sickle, Sunny Kim, and multi-time NGA Tour winner James Woodson.

Defending Champion Ken Looper, who starred at New Orleans and LSU before turning professional in 2012 and earning NGA Tour Rookie of the Year honors, was in contention for the first two rounds before a third round even par 72 left him out of the title hunt. Looper would finish strong, shooting 4 under par final day, eleven under par for the event, and in solo 6th, a shot behind Weston’s Jon Mclean who finished alone in 5th. Auburn alum and Web.com Tour member Michael Hebert finished alone in 7th at 10 under par for the event. The NGA Tour would like to thank the staff and volunteers at Ocala National and the city of Ocala for hosting such a wonderful event week. The NGA Tour would also like to recognize and thank our tournament directors Debra Greene, Donna Delahunty, Ocala National F&B Manager Kaylee Argueta, and the entire Ocala National “Grill Team/Girls” for hosting our tour staff and players for dinner celebrations throughout the week. The NGA Tour Pro Series resumes tournament play Thursday April 10th through Sunday April 13th at Sapelo Hammock Country Club in Shellman Bluff, Ga. for Nesmith Chevrolet Classic. There will be a Sponsors’ Pro-Am and free Junior Clinic early in the week. For more information on the NGA Tour please visit www.ngatour.com or call 800-992-8748.