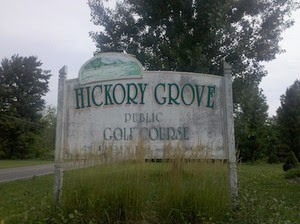 Generally, when American Golfer posts about a golf course, it's because it has received an honor or announced an incredible package. Our staff has even posted reviews on courses we think are worth the golfing public's valuable time and money.

Today, we offer a complete 180 on the aforementioned concept. For the first time, we're about to tell you to avoid a course at all costs.

If you're in Jefferson, Ohio, have your golf clubs in the trunk and are jonesing for a round, you'd be better off finding an open field and firing shot after shot into the woods than playing Hickory Grove Golf Course.

1. The fairways are burned out and rock hard. While much of Northeast Ohio has suffered through a very dry summer, comparable courses in the area (Chapel Hills and Maple Ridge, to name two) have managed to keep their fairways relatively soft ... and alive.

2. Horrible tee boxes. There are several tee boxes that haven't seen seed in months, but one - No. 6 - takes bad to another level. Playing off the norm (dirt) would be preferred over the worst case of crab grass infestation we've ever seen. On second thought ... at least it was green.

3. Staff. You've paid/wasted your money, and stop in the clubhouse for a cool drink to wash the taste of that experience out of your mouth. You're greeted by a sourpuss head pro with less personality than a bag of tees. That's insult to injury!

Ashtabula County is flush with affordable public golf. There are no must-play courses, in our opinion, but there is now one must-avoid course - Hickory Grove.

Editor's Note: The last thing we want to do is knock a course that is doing its best to survive in a difficult environment and down economy. Many courses are doing the best they can with what they have at their disposal. That said, when a course hits rock bottom and, seemingly, has no apologies, we feel we owe it to our readers to share our thoughts.
Posted by Blogger at 2:47 PM