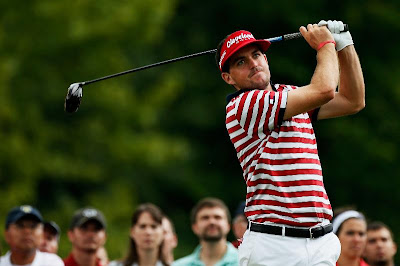 In early 2012, Tommy Hilfiger announced Keegan Bradley as global ambassador for the Tommy Hilfiger Golf men's collection through 2014. Commencing January 2012, Bradley has been representing the brand at major tournaments in select pieces from the men's golf collection. Tommy Hilfiger Golf was re-launched in North America in 2011 in a licensing deal with Fletcher Leisure Group.

Bradley began the final day of the tournament three shots out of the lead, and fired an impressive final round capped off by a sensational 15 foot par-saving putt to finish the tournament with a one stroke victory over Jim Furyk. He will defend his 2011 PGA Championship title next week at Kiaweh Island Resort on Kiaweh Island, SC.

"Keegan played a fantastic game this weekend," said Tommy Hilfiger. "It was exciting to watch his drive and determination on Sunday. We are all very proud to have as a part of the team at Tommy Hilfiger, and wish him luck as he prepares to defend his 2011 PGA Championship title next weekend."

During his come-from-behind win on Sunday, Keegan looked every bit the part of a championship winner in bold Tommy Hilfiger Golf classics.  He stood out on the course in red, white and navy polo and white chinos. The preppy attire looked sharp as Keegan delivered strong tee shots and a meticulous putting technique to win the Bridgestone Invitational.

"We are very proud of Keegan's performance, and to have him as an ambassador for the Tommy Hilfiger Golf men's collection", said Mark Fletcher, president of Fletcher Leisure Group. "The field was very competitive and he demonstrated his ability to compete with the very best golfers; he is part of the elite."

Keegan Bradley was the 2011 PGA Championship winner and was recognized as the PGA Tour Rookie of the Year. The 26-year-old is in his second full season on the PGA Tour; Bridgestone is his third PGA Tour victory.