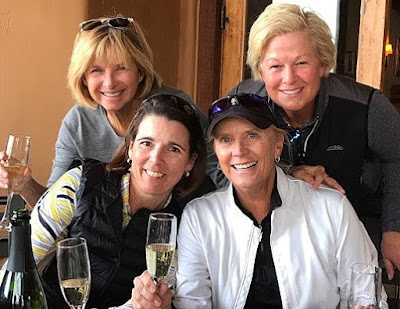 For the Second Time in Less than Three Years, with Odds of More Than 17 Million to 1

(Scottsdale, Ariz.) - Imagine the roar if two players made back -to-back aces on the 16th hole at TPC Scottsdale during the Waste Management Phoenix Open.

Well, the cheers were not that loud, but it was just as thrilling Tuesday, January 29, for Desert Mountain Club members Kathy Henderson and Claudia Pilot, who sank back-to-back holes-in-one at the par-3 third hole on the private club’s Apache Course.

Amazingly, this is the second time members have recorded back-to-back aces at Desert Mountain Club in less than three years.

According to the National Hole-In-One Registry, the odds are 17 million to one of two players in the same foursome making aces, with the odds of back-to-back aces even higher.

This was not the first time two golfers pulled off the unique feat at Desert Mountain, which on June 8, 2016 saw club members Diane Thomas and Shaye Chandler both making aces in the same group on the 90-yard, par-3 eighth hole of the Chiricahua Course – a slightly uphill shot to a blind green.

And there seems to have been a “lucky charm” in the two groups: Member Anita Wallace has witnessed both events.

Who knows what will happen when these “aces’ start playing Desert Mountain’s new seventh golf course, No. 7 at Desert Mountain, which debuts in March? The 18-hole, par-54 course is the focal point for the exclusive Seven Desert Mountain community, will feature 18, par 3 holes – offering plenty of opportunities for more back-to-back aces.

Visit www.desertmountain.com for more information and membership details.
Posted by Blogger at 10:05 AM