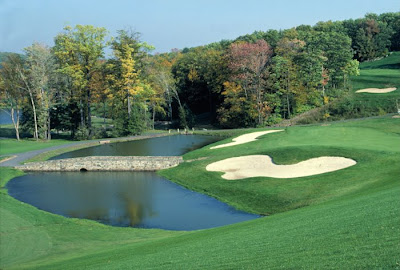 Whether it is golf on a championship course, exploring Mother Nature’s options, or relaxing at a luxurious spa, the Pocono Mountains have been a must-visit destination for generations and offer a variety of recreational interests and world-class resorts for people of all ages.

• 1938 – Shawnee Inn & Golf Resort – the first-ever design by A.W. Tillinghast – hosts the PGA Championship where Paul Runyan upset the great Sam Snead. The classic course would later host the 1967 NCAA Championships, won by a legend in the making, Hale Irwin.

• 1952 – Arnold Palmer meets his future wife, Winnie, at Shawnee-on-the-Delaware, beginning one of golf’s great romances and cementing the Pocono Mountains reputation as the “Honeymoon Capital of the World.” The Palmers loving and affectionate relationship was well-documented as they were married for 45 years until Winnie’s untimely passing.

• 1959 – While representing Pocono Manor, Art Wall Jr. won the Masters and was named PGA Player of the Year, now his son Greg is currently the course’s Head Professional.

• 1974 – NASCAR hosts its first race at the Pocono Raceway – introducing hundreds of thousands of fans to great golf in the four-county destination – and continues to host two events annually.

Combined with the close proximity of New York City, Philadelphia and the Jersey Shore, the mountain getaway has only grown in popularity over recent seasons. Golfers are choosing to stay closer to home rather than fight the rising travel costs and overcrowded fairways at other destinations. Instead of checking extra luggage, boarding planes and waiting in lines, smart golfers are making the short, scenic drive and teeing off on one of the Pocono Mountains many courses.

A complete list of Pocono Mountains golf courses and links to individual Web sites can be found at www.poconosgolf.com. The four-season destination also provides the ideal backdrop for corporate outings and meetings. If it’s an overnight stay, a weekend getaway or an extended vacation, people are increasingly discovering the convenience and proximity of the Pocono Mountains properties and value-laden packages.

For more information about golf and other activities in the Pocono Mountains: 800.POCONOS (800.762.6667), www.poconosgolf.com, www.800poconos.com.
Contact: AmericanGolferBlog@gmail.com
Posted by Blogger at 4:56 PM