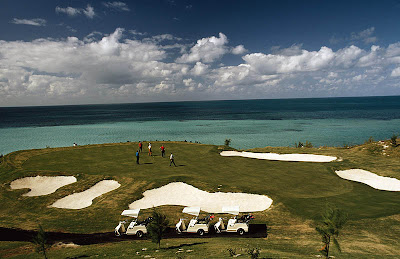 (PALM BEACH GARDENS, Fla.) - Port Royal Golf Course in Bermuda, which the late architect Robert Trent Jones Sr. deemed it his finest work outside of the United States, has been named the site for the 2009 and 2010 PGA Grand Slam of Golf.

The PGA Grand Slam of Golf, the season-ending showcase of the game's premier foursome and one boasting the most difficult qualification requirement in the game - a major championship - is televised by TNT to a worldwide audience.

Port Royal Golf Course, a public course that opened for play in 1970, has undergone a $13.7 million renovation that extends the layout 281 yards to 6,842 yards. The course will be reopened in January 2009.

"We are so proud to extend our valued partnership with The PGA of America and the Grand Slam of Golf," said Ewart F. Brown, Premier of Bermuda and Minister of Tourism. We are especially proud to have an event as prestigious as the Grand Slam at Port Royal -- a spectacular public golf course that belongs to the people of Bermuda and speaks loudly to our country's commitment to the game."

"My hat is off to the members and staff at the Mid Ocean Club. Last year, and once again this year, they've shown Bermuda and the world they can handle a top-notch golf event with expert precision. From the course maintenance to the hospitality to the volunteer effort -- they have set the bar extremely high."

The PGA Grand Slam of Golf is hosted by the Bermuda Department of Tourism, Mid Ocean Club and the Fairmont Southampton.

The 6,842-yard, par-71 Port Royal Golf Course began its renovation program in January 2008, a project that includes rebuilding tees and greens and installing TifEagle grass. All bunkers have been redesigned and a reverse osmosis plant and course irrigation system has been installed.

Established in 1979, the PGA Grand Slam of Golf has grown from an 18-hole, single-day charity event to a 36-hole annual showdown that matches professional golf's best against each other.

The PGA of America Since 1916, The PGA of America's mission has been twofold: to establish and elevate the standards of the profession and to grow interest and participation in the game of golf.

By establishing and elevating the standards of the golf profession through world-class education, career services, marketing and research programs, the Association enables PGA Professionals to maximize their performance in their respective career paths and showcases them as experts in the game and in the $76 billion golf industry. By creating and delivering dramatic world-class championships and exciting and enjoyable golf promotions that are viewed as the best of their class in the golf industry, The PGA of America elevates the public's interest in the game, the desire to play more golf, and ensures accessibility to the game for everyone, everywhere.