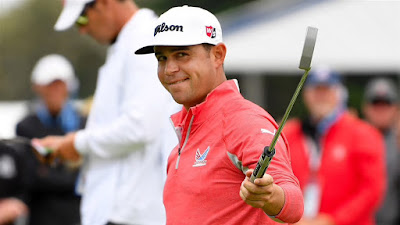 Gary Woodland is all smiles after winning the 119th U.S Open at Pebble Beach


(RELEASE) - Gary Woodland returned to the Titleist golf ball - the brand with which he won his first PGA TOUR event in 2011 - at the Wells Fargo Championship in May. A month later, he made history by capturing the U.S. Open Championship for his first major title.

The U.S. Open was just the fourth event in which Woodland played the Pro V1, having made the cut in each of the previous three starts. As a free agent, he made the change without an agreement.  This week, Woodland made it official, becoming the newest member of the Titleist golf ball roster prior to the start of the Rocket Mortgage Classic in Detroit. It will be his first start since his win at Pebble Beach.

"For me, it was a matter of looking for a little more spin than the golf ball I was playing," said Woodland when Team Titleist caught up with him on the practice range on Tuesday. "I was partners with Charley Hoffman at the Shark Shootout and I played his Pro V1 during the alternate shot, so I was familiar with it a little bit."

However, it wasn't until practicing at Augusta National for the Masters when Woodland's coach Pete Cowen suggested the change.

"I was hitting balls and Pete's like, 'You just don't have enough spin.' So I asked the Titleist guys for golf balls to bring home. Even though I was familiar with it a little bit, I was surprised when I switched to the Pro V1. I got more spin, but I didn't lose any speed. In fact, I actually picked up a little speed and that was it for me. So, I literally tested for about an hour. It was a very easy switch and it went right into play the next time I teed it up."

Woodland teed up the Pro V1 for the first time in competition at Wells Fargo, where he made the cut but withdrew after the third round when he injured his wrist.  Two weeks later he tied for 8th at the PGA Championship in May, and his confidence continued to grow.

“For me, I want to look up and see the golf ball come out exactly where I’m looking every time. The window it comes out is so consistent."

“The golf ball performed great at the U.S. Open where I needed to have more spin the way the greens were at Pebble Beach,” continued Woodland. “It's was a great switch. I can rely on my short game and I am able to hit some shots that I didn’t have last year.”

"I also love the durability. I only switch balls when I make bogeys, so I only took four balls out of play at the U.S. Open. So, I played with the same ball a lot, which was nice. But, the big deal is consistency and no surprises - and I didn't have any of those."
Posted by Blogger at 9:52 AM