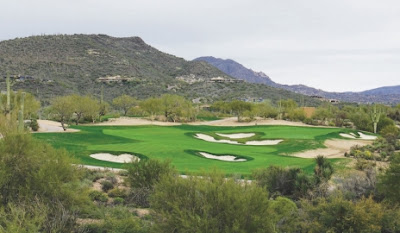 Since debuting in 1987, Renegade has placed on Golf Digest’s list of “America’s 100 Greatest Golf Courses” three times. It is a fixture on lists of the best courses in Arizona. In fact, Golf Digest once called Renegade “the most versatile course in the world” for its use of two greens on every hole, allowing golfers the option of playing it shorter or longer based on the tee and green they chose.

Renegade will still provide two pin placements on every hole, allowing Desert Mountain members to customize the course every time they play it. Either pin placement can be played on any given day, providing endless options and distance variety from a forward tee-length of 4,500 yards to a champions’ test of 8,000 yards. The customization goes so far that hole 10 can play beautifully as a par 4 or par 5 and hole 12 can be played either as a par 3 or par 4—depending on the day and the choice of the player.  Every available playing option will be rated by the Arizona Golf Association, so players can enter accredited scores.

“Everything—including the game of golf—evolves and when the game changes, you’ve got to adapt with it,” said Nicklaus. “We opened up the renovated golf course a little bit by flattening the mounds and broadening the fairways, but it’s still the same golf course with two pins on every hole—just with a modernized playing strategy.”

In an effort to reduce maintenance expenses associated with water and labor, the new design will require less hand mowing. About 10% (or about 12 acres) of irrigated turf was removed and turf switched from bermuda to bentgrass, making Renegade the only course in Scottsdale to feature wall-to-wall, cool-season turf base year-round. Using bentgrass also eliminates the need to overseed, further reducing water usage, while allowing the course to remain green year-round.

Nicklaus once said that Renegade might be the toughest course he’s designed and played (he kidded on a recent site visit that he shot 83 during the 1987 grand opening—one year after winning the Masters at age 46—and missed only one fairway), while also the easiest, due to the two-green system.  The renovation showcases the evolution of his design philosophy and also makes Renegade more maintainable and sustainable, while preserving its unique original design foundation.

Other components of the renovation:
- A new, state-of-the-art irrigation system was installed
- A few bunkers were added to the course while others were repositioned, adding both strategic options and visual appeal
- All bunkers were fitted with new liners and a total of more than 100,000 tons of new sand
- New tee boxes, including forward tees, were constructed to challenge the best, while providing options for avid and/or beginning golfers
- Renegade now features six single greens, with two pins on them, and 12 holes with double- greens. Previously, it was five holes with three greens, and 13 holes with one large green. This reduced the total green size by more than 25%
- Golfers’ views of the surrounding mountains have been enhanced, as are the views of the course from the homes that overlook it.