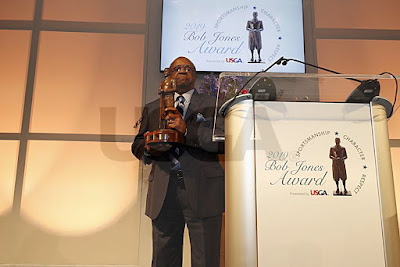 (PEBBLE BEACH, Calif.) – The USGA honored 2019 Bob Jones Award winner Lee Elder on Wednesday, June 12 at the Inn at Spanish Bay as part of its week-long celebration of golf.

Presented annually since 1955, the Bob Jones Award recognizes an individual who demonstrates the spirit, personal character and respect for the game exhibited by Jones, winner of nine USGA championships.

Elder is its first African American to receive the USGA’s highest honor.

VIPs from the worlds of sports and entertainment attended the dinner to celebrate Elder, including Gary Player, Jack Nicklaus and Jim Nantz. In his speech, Player specifically noted Elder’s courage in accepting an invitation to play in South Africa despite the Apartheid occurring.

A link with photos from the event can be found here under “visual assets.”

Elder burst onto the PGA Tour in 1968, taking Jack Nicklaus to a playoff in the American Golf Classic. He used his newfound fame to introduce disadvantaged youths to the game through a variety of means, including after-school programs at Langston Golf Course in Washington, D.C. and establishment of the Lee Elder Scholarship Fund to help young men and women attend college.