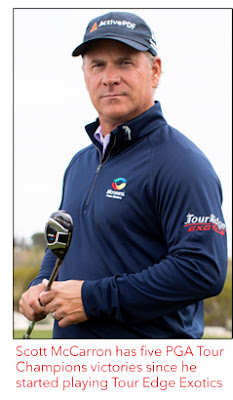 His victory is the 10th win for Exotics clubs on the PGA Tour Champions over the last two seasons, five of which have come from the No. 1 ranked McCarron. McCarron had the low round Sunday at Narita Golf Club at 5-under par.

He hit a tournament-clinching 246 yard shot to 20 feet with his Exotics CBX 119 hybrid on the penultimate hole to take a 3-shot lead, a club he calls the “best hybrid I’ve ever played.”

McCarron, who wears a Tour Edge Exotics logo on his sleeve, is the current No. 1 ranked player in the PGA Tour Champions with $1,766,221 earned in tournament winnings this year.

“We are having a blast watching the meteoric play of our staff player, Scott McCarron,” said Tour Edge President and Master Club Designer David Glod. “Scotty has brought us a new level of exposure and awareness, as has all of the over 60 players who have put Tour Edge into play on the PGA Tour Champions over the last 18 months .”

McCarron’s three victories in 2019 have come in the last six weeks.
• On April 21st, Exotics staffer Scott McCarron won the Mistubishi Electric Championship at TPC Sugarloaf.
• On May 5th, McCarron won again for his 2nd title in three weeks at the Insperity Invitational at The Woodlands Country Club.

Other Top Finishes for Exotics in Japan
Another player with an Exotics CBX 119 hybrid in play in Japan finished 10th, while a new player to Tour Edge finished 17th this week following up a 5th place finish last week in Iowa with the Exotics CBX Iron-Wood in play.