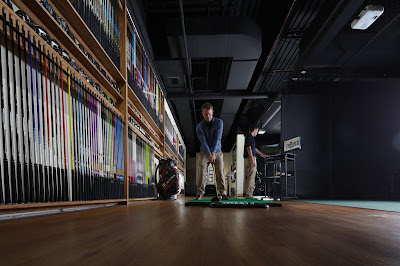 
(Willowbrook, IL) — In a world where staples like Toys "R" Us and Payless ShoeSource are disappearing from store directories, the outlook for new brick and mortar business ventures seems bleak. More retailers are moving to an e-commerce model, and even more are downsizing or prioritizing to compete in crowded spaces. The golf industry would seemingly fall in line with these company casualties, but one brand is succeeding amongst the chaos - Club Champion, a custom golf club fitting company.

Recognized as the top fitter, builder and retailer of the best brands in golf, Club Champion stands out in a niche market. Their dynamic vision has catapulted them to be ranked as the #1 specialty fitter and #2 fitter overall according to Golf Datatech, the golf industry’s market share monitor. The company’s thorough processes and attention to detail set them apart from the competition.

“We offer a service that every serious golfer can benefit from,” said Nick Sherburne, Club Champion’s founder. “Our business model works because the service works - we can show measurable improvements for our customers, and that translates to happy golfers and a higher demand for what we do.”

Offering premium service and an unrivaled product selection, the company opened 31 stores in the last 12 months. In 2018, Club Champion posted same-store sales growth of 59%; each store conducts an average of 500-1500 fittings per year, with many stores surpassing that.  Their Tour-quality fitting experience is sought after by golfers of every skill level, and their fitting studios service most of the major golf markets in the country.

Unlike traditional retailers that carry inventory and face significant price pressure, Club Champion fits and builds unique, custom clubs for their customers. Operating with a “just in time” inventory system, inventory needs are minimal. Because their product is custom fitted, they don’t compete against web-based retailers on price. As a result, the company is one of the fastest growing retailers in golf with 2018 overall revenue growth up almost 60%. Expanding from just eight locations five years ago, the company currently has 62 retail studios and is planning to open additional stores in 2019.

According to Club Champion CEO Joe Lee, “By 2015, we had proven our new store concept as well as the ability to open multiple locations in a market. It was time to roll out Club Champion nationally. We knew the concept worked and that there was measurable demand, so we’ve been opening new locations at an accelerated pace ever since.”

The typical studio footprint is approximately 3,000 square feet and includes a minimum of two fitting bays equipped with TrackMan launch monitors, a SAM PuttLab, a build shop and features an extensive equipment wall with more choices than any other retail chain. Lee says, “The shaft wall, coupled with our expert fitters, is where a lot of the magic happens.”

Club Champion’s brand agnostic approach has helped them succeed in a market that’s heavily influenced by brand advertisements. Because they focus on the golfer and not the manufacturer, they’re able to give each customer a unique and informative experience that delivers real results on the course. A Golf Digest study found that eight out of nine Club Champion custom-fit golfers lowered their scores by as much as six strokes per round and added an average of 21 yards off the tee.

In 2018, Club Champion brought PGA Tour superstar and three-time Major winner Jordan Spieth on as a brand ambassador. They have also signed endorsement deals with world-renowned golf coaches Hank Haney and Cameron McCormick, and have re-signed legendary instructor David Leadbetter. All four ambassadors recognize the impact of properly fit clubs on any golfer’s game, no matter the skill level.

“There isn't anyone who can’t benefit from club fitting,” said Haney. “People just don't pay enough attention to their equipment. I guess they just think it's all the same, but it's not. If you get the right club for you, it can make a tremendous difference in your golf game.”

It’s not just golf personalities who are impressed by Club Champion; equipment manufacturers also hold back nothing with their praise for the custom fitter. TaylorMade CEO David Abeles commented, “Club Champion truly is one of the most innovative club fitters in the business. They provide a consumer experience that is undeniably helpful for all golfers to play better..” Callaway CEO Chip Brewer confirmed, “Club Champion is a fantastic consumer experience. One of the great, new age golf retailers who understand that fitting is the future.”

Lee believes in the Club Champion method and the results it garners. “Other people sell golf clubs, we sell improvement,” he said. “We not only solve equipment problems, but we show and explain why each particular piece of equipment (shaft, head and grip) works for their unique swing.”

For more information about custom club fitting and Club Champion’s process, visit clubchampiongolf.com.
Posted by Blogger at 6:30 AM

This show the golf trend is going to next level.
Most Beautiful Female Golfers