(ST ALBANS, Mo.) - The 2016 version of the Metropolitan Open set a new standard with 105 professionals competing in July last year for the $25,000 first prize. Dan Woltman (Beaver Dam, WI) walked away with the first place check after surviving a final round 74 to win the championship by a stroke at 204 (-6).  Woltman has played full time on the Web.com this season. 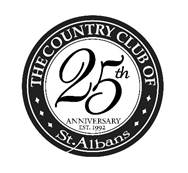 The 2016 Open attracted professionals from all around the country and this year we have 115 professionals from 32 states ascending on St. Albans to compete for another $25,000 first prize.  The 115 professionals along with 41 of the top amateurs from the Metropolitan region will make up the field of 156.  Several players in our field recently competed in the U.S. Open Sectional Qualifying.

Raj Bhuyan, CCSA Board President along with Morgan Gonzalez (General Manager) and Joe Schwent (Head Golf Professional) remarked, “The members at The Country Club of St. Albans have made it a priority to support championship-level golf over the years, and feel honored to be able to host the 12th Metropolitan Open Championship.  Now that it’s been over a year since the completion of our course restoration project, we are looking forward to see this field (which appears to be the strongest in the history of this championship) take on the challenge of our Lewis and Clark course. We wish the competitors the best of luck on behalf of the membership.”

Recognized as one of the premier private clubs in the St. Louis market, The Country Club of St. Albans offers 36 holes of championship golf, including the Lewis and Clark course (1992) designed by Tom Weiskopf and Jay Morrish and Tavern Creek (1997) designed by Dr. Michael Hurdzan and Dana Fry. Together, the courses combine for two of the best golf courses in the state including being ranked by Golf Digest on their 2015-2016 list of the best courses in Missouri (Lewis and Clark – 7, Tavern Creek – 9).

Sam Migdal and Skip Berkmeyer tied for Low Amateur honors in 2016, both had a very impressive championship and would finish Even par for the championship. Groupings and Starting Times are now available at METGA.ORG and you can follow LIVE SCORING through the championship via the website.

The 2017 Open will open on Tuesday June 13 with the Metropolitan Pro-Am.  The Pro-Am has become an integral part of the Open allowing sponsors the opportunity to meet and see first-hand professional golf at its finest.

“The Metropolitan Open has grown into one of, if not the finest, Open Championship in the Midwest. The Country Club of St. Albans continues to perpetuate championship golf from procuring volunteers to assist in scoring to the over 40+ competitors who will stay in private housing made possible by the St. Albans membership,” mentioned Curt Rohe, Executive Director of MAGA.

Championship play will commence Wednesday with all competitors playing 36-holes Wednesday and Thursday before a cut to the Low 40 and ties is made for the Final Round Friday. The Championship is FREE for spectators to come out and see one of the strongest fields to tee it up in St. Louis!

If you should have any further questions, contact Curt Rohe, Executive Director, via email at curt@metga.org or phone at (314) 567-MAGA.
Posted by Blogger at 11:04 AM