Etowah Valley Celebrates 50 Years of Golf at the 'Brickyard' 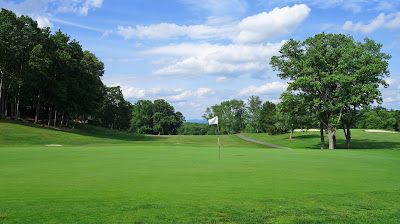 (ETOWAH, N.C.) – A golf course that sprang from unique beginnings celebrates its 50th anniversary this summer.

And after a few rough years during the Great Recession, new owners have invested nearly $2 million in the stay-and-play resort to set the stage for another 50 years of golf at the brickyard.

“There are not a lot of clubs that have been around 50 years. We’re very proud of it and we’ve done a lot of good things since the course first started in 1967,” says head golf professional Rick Merrick. “Our new owners came in a few years ago and provided the capital and vision to turn things around. They have a great plan and it’s exciting to see what they’re doing.”

The ownership group, based in nearby Asheville, is comprised of 14 partners. Managing partner Tim Rice learned to play golf at Etowah years ago and feels strongly that his group has charted a successful future for Etowah Valley.

“We have a vision for Etowah Valley Golf & Resort and feel good about the plan and execution after nearly three years,” says Rice, whose group took over in late 2014. “Our members and resort guests are excited about our efforts. They see that our dollars are being well spent.”

In just under three years, the ownership group has purchased a new fleet of golf carts and course maintenance equipment, installed a new irrigation system on the South Nine, hired a veteran course superintendent respected industry-wide, renovated all 65 lodging rooms, upgraded the on-site restaurants, and purchased and rebranded a smokehouse on the edge of the resort.

Rice says Etowah Valley’s leaders have always shown great vision, from Bruce Drysdale, the owner of the brick corporation who conceived the course, to his daughter and son-in-law, Betty Anne and Frank Todd, who built the facility, ran it for decades, and expanded it to a stay-and-play resort with 27 holes.

“We recognize Frank Todd and his family for being pioneers in the hospitality business in Henderson County,” Rice says. “Especially for them to have the vision to reclaim a distressed piece of land that had been stripped of all the clay for bricks. They put a lot of love and care into it and here we are celebrating their vision 50 years later.”

Course superintendent Steven Neuliep is in the third year of a five-year plan to elevate course conditions. He has removed trees to improve turf growth, worked on drainage and irrigation issues, and made great strides with the bent grass greens. Neuliep delays opening each nine one morning a week for extensive maintenance that can’t be done when golfers are on the course.

The lodging component has been upgraded as well. Each room received new furnishings and bathroom fixtures, high-definition flat screen televisions and high-speed Wi-Fi.

“We brought the hotel lodging up to modern standards,” says Rice, noting that all rooms on property overlook the golf course.

On the hospitality side, the non-descript snack bar in the clubhouse has been tripled in size, with a bar and dining patio added. Now called Zeke’s Greenside Tavern, it seats 160 and is open from 11 a.m. to 9 p.m. seven days a week, with live entertainment throughout the week.

Chelsea’s Events Center, also on property, serves an extensive country breakfast buffet seven days a week, and the partnership purchased the original BBQ Shak on the edge of the South Nine and rebranded it the Old Etowah Smokehouse. The pit-cooked barbecue is quite popular and the pickle-brined dipped chicken recently appeared on the cover of Garden & Gun.

Of course, the main attraction at Etowah Valley is the course itself. Most layouts built a half century ago have become outdated by modern technology that allows golfers to hit the ball much farther. But Ault designed the original 18 holes at nearly 7,000 yards, which remains a stout number to this day, and the third nine is a respectable 3,318 yards in length.

“Most people think when they come to the mountains they are going to play a real hilly golf course, but we’re in a valley here,” says Merrick. “And we’ve got three different nines. Our South Nine is relatively flat, but tree-lined and very challenging. Then our West Nine is kind of rolling hills and a little bit wider in the fairways and a little bit longer. Then we have the North Nine built in the late 1980s that is a little shorter, but hillier with smaller greens and a totally different look.”

In 26 years at Etowah Valley, Merrick has seen a lot of repeat customers from all over the nation. He credits the convenience factor of having a stay-and-play facility with all the amenities.

“Golfers feel like they are playing a different golf course each day when they pair two nines together,” Merrick says. “They play golf all day and don’t have to go anywhere for dinner or hospitality. We have groups that have been coming here for nearly 40 years and there are people booked here for the next 10-12 years. They really enjoy it.”