(Franklin, TN) - Shooting a near flawless 67-66-69- 202, 14 under par, Brandt Jobe rode some great play tee to green, and great consistency with his putter, to a very popular victory at the Principal Charity Classic in Des Moines, Iowa. The winner check of $262,500 vaulted Jobe into sixth place in the Charles Schwab Cup. He led the field in most birdies (18) and fewest bogeys (2), and made putt after putt all weekend when he needed it most. 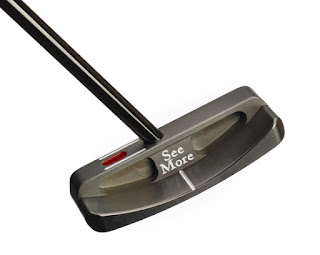 Jobe put the new SeeMore Nashville Studio Series ONE SS, in play three weeks ago in Birmingham, at the Regions Tradition, a Major Championship, leading to a top 25 finish. He then finished top 10 at his next event, another Major, the KitchenAid Senior PGA Championship. Now in his 3rd event with the Rosemark grip and SeeMore putter, he holds off Bernhard Langer, Scott McCarron, and Kevin Sutherland for the biggest win of his PGA Tour career.

RST Technology - SeeMore’s patented RST, known by a visible gun sight on the top line, allows the golfer to set up the putter perfectly each and every time in relation to the intended target line. This is accomplished by lining up the black bottom portion of the shaft between two white lines and covering a signature red dot on the heel of the top line.  The process is like locking radar onto a target.  The two parallel white sight lines frame the shaft and serve as an indicator that the golfer is in perfect position to make a consistent and reliable stroke.

For more information, visit www.seemore.com.
Posted by Blogger at 9:07 AM