(HUNTINGTON BEACH, CA) – Srixon and Cleveland Golf congratulate staffer Brandt Jobe for his first PGA TOUR CHAMPIONS victory at the Principal Charity Classic over the weekend in Des Moines, Iowa. Jobe shot a 3-under-par 69 in the final round at Wakonda Club to post a winning total of 14-under par. 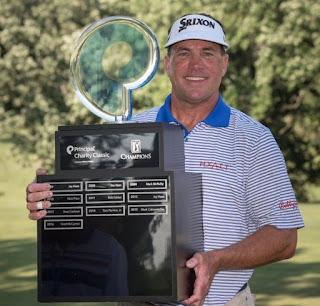 Trusting the exceptional distance, feel and control of his Srixon Z-STAR XV golf ball, Jobe sealed victory with a stellar display of power, precision and consistency. All three of his rounds (67-66-69) were under par, as the 51-year-old has now posted 19 straight rounds of par or better.

Jobe, a native of Oklahoma City, Okla., and a graduate of UCLA, has played on professional golf tours all over the world and had not won since 1998.

His first-place check of $262,500 vaults him to sixth on the PGA TOUR CHAMPIONS Charles Schwab Cup money list with a total of $556,978. Jobe has three top-10 finishes in 2017, and it is the seventh time in nine starts he has finished inside the top 25.

Jobe’s Z-STAR XV golf ball has helped him become one of the most dominant ball strikers on the PGA TOUR CHAMPIONS this season. Following his win at the Principal Charity Classic, he stands fourth on the circuit in Driving Distance (298.1 yards) and sixth in Greens in Regulation (76.7%).

This win also marks the 15th worldwide professional victory for Z-STAR XV in 2017.

For additional information on Srixon / Cleveland Golf / XXIO products and staff players, visit the Srixon, Cleveland Golf and XXIO USA websites.
Posted by Blogger at 8:59 AM