(Cary, NC) - TGA Premier Junior Golf (TGA), the leading golf industry program creating and bringing new players to the sport in the key 3-13 and 25-45 age groups, is continuing to grow with the establishment of a second chapter in Raleigh/Durham, N.C. 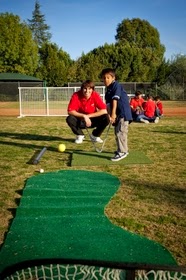 Paul Maskill, a former finance executive who brought the first TGA Chapter to West Wake County in 2011, said growth and increased demand led him to acquire another chapter.

“After growing West Wake County for the last three years, we started to receive quite a bit of demand from parents and schools in East Wake County,” he said.  “As a result we have expanded our staff to include two full-time Territory Directors as well as a Golf Program Director, which has also allowed us to expand our territory and continue to grow.”

Maskill said the TGA franchise model has proven to be a very successful career opportunity and a great way to introduce the game to new golfers.

“Schools and facilities that we work with have been very welcoming and allowed us to bring over 5,000 new golfers into the sport since 2011,” he said.

TGA (Teach, Grow, and Achieve) first came to North Carolina in 2008 with a chapter in Charlotte under the direction of PGA Professional Champ Detamore.  Since then, the North Carolina chapters have brought over 22,000 youth into the game through after-school enrichment and summer camp programs.

TGA was developed over 10 years ago as a model to target all demographics while concentrating on households with incomes greater than $50,000, which accounts for 80 percent of the junior golfers in America. With 41 million kids ages 5-18 in the U.S., and only six percent of them currently playing golf, TGA is focusing on the 94 percent who don’t play golf – as well as their parents.

TGA first teaches and then transitions students and families from schools and community centers to local golf courses through camps, festivals, play days and parent-junior events. In the process, TGA not only creates new golfers but generates revenue and rounds for golf facilities.

TGA Premier Junior Golf (TGA) is the leading golf industry model involved in developing and bringing new players into golf at the same time members of the baby boomers generation are aging and leaving the game. Its franchise business model, the only one of its kind in the industry, has empowered entrepreneurs and PGA golf professionals nationwide at the grass roots level to activate thousands of youth ages 3-13 and their parents 25-45 (new millennials).

TGA targets introductory and recreational players through an affordable and accessible golf curriculum that breaks down barriers by offering physical education and after-school enrichment programs at elementary and middle schools, childcare centers and community centers. Its specialized curriculum focuses on instilling a passion for golf while promoting advancement, achievement, STEM core academics, and the attainment of life skills on and off the course.

TGA, which has become the premier feeder system to many of the industry’s leading junior golf programs and events, has brought over 325,000 juniors into golf while making the sport available to 1.5 million families nationwide.