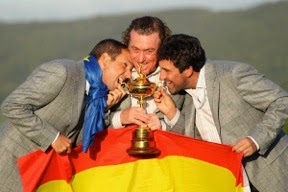 (RELEASE) - José María Olazábal and Sergio García, two of Spain’s biggest Ryder Cup stars, have given their full support to the country’s bid to bring The 2022 Ryder Cup to Costa Brava-Barcelona.

As all bidding nations prepare to submit their bid dossiers to Ryder Cup Europe, Olazábal and García join forces to describe what a home Ryder Cup would mean to them, and golf in Spain. 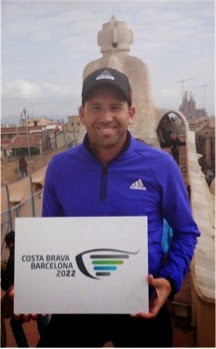 Olazábal, who captained the European Team to victory in 2012 and partnered Ryder Cup icon Seve Ballesteros, winning 11 of their 15 matches together, said: “It would be fantastic to have The Ryder Cup at home in 2022. It would be beautiful, especially on the 25th anniversary of Valderrama. We have a Ryder Cup history to be proud of. It would be a great tribute to the contribution that all Spanish players have given to this event.”

At the age of just 19, Sergio García became the youngest player to participate in the revered competition. He has been a member of the European Ryder Cup team a staggering seven times – having been on the winning side five times – and was vice-captain in the 2010 edition.

Speaking about the impact a Spanish Ryder Cup would bring, García said:  “The Ryder Cup means everything to me. It’s the most exciting tournament we have in golf and one of the most exhilarating sporting events on the planet. I hold it very close to my heart.

“It would be truly amazing to have a Ryder Cup in Spain,” he continued. “It’s very important for our new generation. It helped increase participation considerably in 1997 and it would be a great boost for Spanish golf.”

Spain’s bid enjoys unanimous support from both Government and private sector supporters. If successful, The 2022 Match would be played at PGA Catalunya Resort, located within easy reach of the twin gateway cities of Barcelona and Girona, and within minutes of the beaches and resorts of the Costa Brava.

Find out more about the Costa Brava-Barcelona 2022 bid at www.costabravabarcelona2022.com.
Posted by Blogger at 11:57 AM