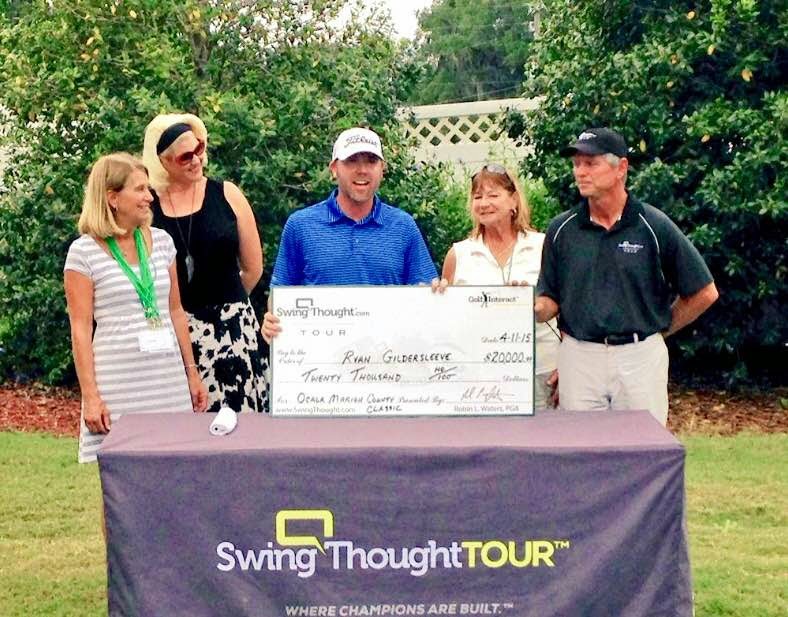 Gildersleeve, who starred at the University of South Alabama, opened the tournament with a 1st round 67, good enough for 2nd place after the first day. Rounds of 69 and 70 followed leaving him in still in 2nd and a shot back of tournament leader and Texas A&M alum Tyler Dunlap heading into Saturday’s final round. Gildersleeve managed to get up and down on 18 for par, finishing with a final round 2 under par 70. Armstrong Atlantic alum Chris Wolfe had a chance to tie Gildersleeve but missed his birdie putt on 18 finishing in a tie for 2nd with Kentucky alum Mark Blakefield and Alabama alum Trey Mullinax. Blakefield is a past Web.com Tour member who has multiple SwingThought Tour wins while Mullinax earned Web status for this year after making final stage at Q School. This is Mullinax’ rookie season as a professional golfer, following a stellar career at Alabama.

The SwingThought Tour would like to thank Ocala/Marion County, Florida and the members and staff of Ocala National for hosting such a great event for our staff and professionals on one of the top layouts on tour and in the state of Florida.

The SwingThought Tour heads to Tallahassee, Fla. April 19th through 25th for the Killearn Country Club Classic to be held on the former host of the PGA TOUR Tallahassee Open, Killearn Country Club. Past winners at the Killearn SwingThought Tour event include PGA TOUR Greenbrier Classic Champion Ted Potter Jr., Florida alum Tyson Alexander, Minnesota alum Clayton Rask, and Vanderbilt alum Jon Curran. Curran’s win at Killearn in 2013 was the start of his magical Player of the Year season which has let him to a spot on the PGA TOUR this season.  Tournament play begins Wednesday April 22nd and continues through to the Final Round Saturday April 25th. The event is 72 holes spread over the four days with $140,000 purse on the line and the winner receiving a 1st place prize of $20,000 and an Exemption into the Web.com Tour Knoxville News Sentinel Open.