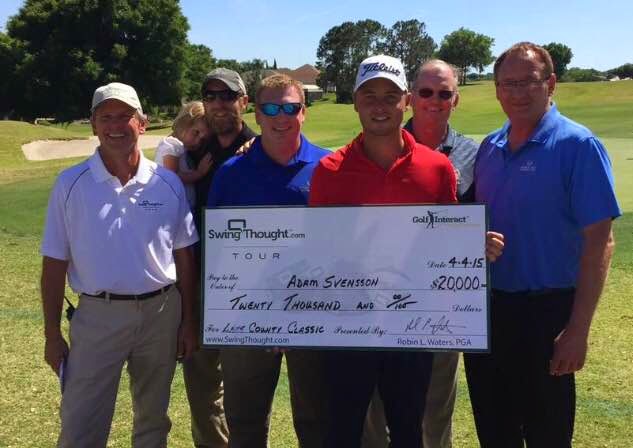 (Lady Lake, Fla.) – In a battle of small school alums with big time golf games, it was Barry University alum Adam Svensson (Vancouver, British Columbia) besting Barry University alum Lucas Kim (Toronto, Canada) in a playoff to secure his first win as a professional. Svensson birdied the first playoff hole for the win and the $20,000 first place prize as Kim made par. Not only was this Svensson’s first professional win but it also came in his first start on the SwingThought Tour (formerly the NGA/Hooters Tour), the number three tour in the U.S.A. Svensson shot a final round 65 just to make the playoff, moving up from 8th place to start the day. Kim is no stranger to the top of leader boards as he himself has 6 wins on the SwingThought Tour this year alone. After this past week’s performance at Harbor Hills Country Club in Lady Lake, Fla. there is no doubt both players have bright futures ahead of them.

Former Alabama star and Web.com Tour member Richard “Gator” Todd shot the low round 64 of the final day (as well as the low round 66 third day) to finish tied for 3rd with Austin Peay alum and fellow former Web.com Tour member Grant Leaver, Central Florida alum Kyle Wilshire, and the defending Champion, 2014 SwingThought Tour Player of the Year and Rookie of the Year Dominic Bozzelli, who currently has status on the Web.com Tour. Stetson alum and past SwingThought Tour winner Sam Ryder finished solo 7th. Kim received $9,980 for the runner-up finish.

The SwingThought Tour heads to Ocala, Fla. for the Ocala Marion County Classic to be held on the championship Ocala National Golf Course. Ocala National is known for being one of the best and most challenging layouts on tour. The event has become a player favorite and seen such past winners as PGA TOUR Greenbrier Classic Champion Ted Potter Jr., Florida alum Tyson Alexander, Kentucky alum Mark Blakefield, Minnesota alum Clayton Rask, and LSU/New Orleans alum Ken Looper who won the event in 2012 on his way to co-Rookie of the Year honors. Tournament play begins Wednesday April 8th and continues through to the Final Round Saturday April 11th. The event is 72 holes spread over the four days with $140,000 purse on the line and the winner receiving a 1st place prize of $20,000 and an Exemption into the Web.com Tour Knoxville News Sentinel Open.