Lexi Bombs Her Way to Victory in Style 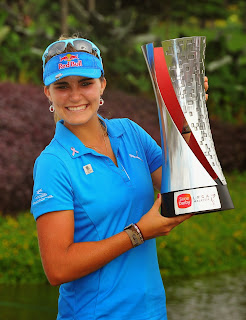 Lexi started the final round in Malaysia with a three stroke lead and kept the lead through 18. On the back nine Lexi fired off three birdies in a row, then another on No. 16 to secure the Sime Darby victory. The 18 year old shot 67, 63, 66, 69 over the four days.

“Lexi is a world class golfer with power and style that was shown through all four rounds of the Sime Darby LPGA,” commented Bob Philion, President COBRA PUMA GOLF. “With the LPGA increasing international tournaments, we are excited Lexi captured the win in Malaysia to represent COBRA PUMA GOLF, as we are expanding into international markets and developing our global relationships.”

With an average driving distance of over 270yds, Lexi bombed her way to victory with COBRA'S AMP CELL PRO Driver. The Women’s AMP CELL Driver line features MyFly Technology which allows you to adjust your loft to maximize distance and manage your trajectory. Along with SmartPad Technology which delivers a square face at address and AMP CELL and E9 Face Technology free up discretionary weight for a 12% larger effective face, delivering faster ball speeds even on mis-hits. Lexi plays the AMP CELL PRO Driver in Capri blue with Pink and Green options also available to consumers.

Lexi sported her signature “Sunday Blue” and wore the Duo-Swing Golf Polo and PUMA Footwear in Brilliant Blue and paired them with the Plaid Tech Bermuda in Brilliant Blue/Multi Plaid. The Duo-Swing Golf Polo has a lightweight construction with the innovative Duo-Swing seaming system that reduces friction during swings. Its coolCELL designation has moisture-wicking properties and features a mesh back for breathability, giving Lexi cool comfort even in the hot conditions.

On Saturday in Malaysia, Round 3 of the Sime Darby- Lexi rocked pink PUMA Golf gear head-to-toe for PUMA'S #ProjectPink. PUMA has pledged to donate 100% of profits from the sale of Project Pink gear, as well as $1 per #projectpink tweet & #projectpink Instagram up to $25,000.