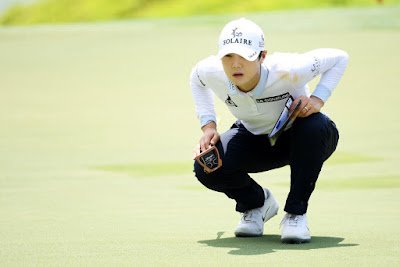 WHAT YOU NEED TO KNOW:
- Park's 6th LPGA victory is the 4th global win for TaylorMade's new TP5/TP5x golf balls. Park joins TaylorMade stablemates Dustin Johnson (Saudi International & WGC Mexico) and Rickie Fowler (WMPO) who have claimed victory playing the new ball.
- Park recently added the new Spider X putter to her bag. Her win is the first global victory for the company's most popular model in '19.
- Park plays the new '19 TP5x, stamped #9. She was born in September and pronounces that 9 is the most structurally beautiful number.
- Park recently added a new 9° M5 driver to the bag, which she has equipped with an MCA Tensei Pro W 5S shaft.
- In addition to her M5 driver, Park also games a new M6 fairway set to 15°. Similar to her driver, she has it equipped with an MCA Tensei Pro W 6 S shaft.
- Park plays a combo set of TaylorMade's P Series irons, opting for a P790 4-iron, transitioning into the P760 for 5-PW. All of her irons are equipped with Nippon's NS PRO 950 R shafts.
- Park typically plays 3 MG wedges, and this week was no exception. She opted for 50, 54 & 60 lofts in her wedges, which are equipped with Nippon Modus 105 S shafts.