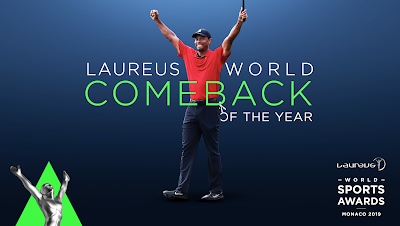 In the company of HSH Prince Albert II in Monaco, Novak Djokovic fought off tough competition from the likes of Kylian Mbappe, Eliud Kipchoge and LeBron James to win the Laureus World Sportsman of the Year Award. Novak, who won Wimbledon and the US Open in 2018 after returning from elbow surgery, is now a four-timeLaureus World Sportsman of the Year.

Speaking after receiving his Award, Novak said: “A Laureus Award is what every athlete wants to win, and this one is a huge honor for me. Being among so many sporting greats here tonight, and hearing about the inspirational work Laureus is doing around the world, gives this Award a special meaning for me.

“Last year was an incredible season for me, returning from injury to win Wimbledon and the US Open is something I’ll remember forever. I am delighted and I would like to thank the Laureus Academy for their support.”

The Laureus World Sports Academy – made up of 68 global sporting legends – volunteered their time to vote for the winners in each shortlisted category which recognises sporting achievement in the 2018 calendar year. The Awards were hosted by actor James Marsden and featured entertainment from award-Grammy-nominated singer-songwriter Jorja Smith.

After her record-breaking performance at the gymnastics world championships, in which she won four gold, one silver and one bronze medal, Simone Biles was crowned Laureus World Sportswoman of the Year. Biles, who also won the Sportswoman Award in 2017, made history last year by becoming the first woman to win four all-around world championships. At just 21, she now has a record 14 career world titles.

FIFA World Cup winners France became the first national football team to win a second Laureus World Team of the Year Award, fighting off competition from the world-leading teams including Mercedes AMG Petronas F1, Golden State Warriors and Real Madrid. French coach Didier Deschamps was in Monaco to accept the Award on behalf of the team.

17-year-old American snowboarding sensation Chloe Kim, who became the youngest woman to win a Winter Olympics snowboarding gold medal at the Pyeongchang Winter Olympics, won the Action Sportsperson of the Year Award.  Slovak alpine skier Henrieta Farkašová and her guide Natalia Subrtova won theSportsperson of the Year with a Disability Award after becoming the most decorated Winter Paralympian in Pyeongchang with four gold medals in vision-impaired Downhill, Giant Slalom, Super Combined and Super-G, plus silver in Slalom.

Attended by sports stars, celebrities and business leaders from around the world, the Awards also shone a light on the transformational work of Laureus Sport for Good. In 2018, nearly 300,000 young people all over the world directly benefited from more than 160 Laureus Sport for Good-supported programmes in 40 countries, working to end violence, discrimination and disadvantage by using sport as the tool for change.

Yuwa, a sport for development organization that works in the rural region of Jharkhand in northern India, received the Laureus Sport for Good Award for their life-changing work in using football to improve the lives of young girls from disadvantaged communities. Through football, the girls overcome violence, build self-confidence and start to change perceptions of what a girl from a rural village in India is capable of achieving. One of Laureus Sport for Good’s key focus areas is promoting equality, empowerment and safety for young women and girls. Of the 296,300 children and young people Laureus Sport for Good programmes reached worldwide in 2018, 49% were young women and girls.

The Laureus World Sports Academy recognized marathon world record breaker Eliud Kipchoge with the Laureus Academy Exceptional Achievement Award. Kipchoge, who ran the fastest time ever in a marathon in Berlin with a time of 2 hours 1 min 39 seconds, broke the previous record by a massive 1 min 18 seconds.

Legendary football manager Arsène Wenger received the Laureus Lifetime Achievement Award for his contribution to football during his 22 years as manager of Arsenal. During his time there, he famously led ‘The Invincibles’ to an entire season unbeaten, and made a significant contribution to English football through his approach to scouting, training and diets, and his emphasis on an attacking mentality.

Skiing great Lindsey Vonn’s incredible career was recognized by the Laureus Academy with the Laureus Spirit of Sport Award. The Spirit of Sport Award is given at the discretion of the Academy, to recognize an athlete or team who have achieved remarkable success and displayed a relentless dedication to their sport. The greatest female skier of all time, Vonn recently announced her retirement from the sport. Vonn is one of only two female skiers to win four Overall World Cups and has won a record eight World Cup Downhill titles.

Inspirational Chinese climber Xia Boyu received the most votes in the global Laureus Sporting Moment of the Year public vote. Xia was recognised for his efforts in becoming only the second double-amputee to scale Everest, and the first to reach the summit from the Nepalese side. Joining Xia in the top three Laureus Sporting Moment of the Year Nominees at the Awards in Monaco were; South Africa’s first black Test captain Siya Kolisi and Scottish rugby legend Doddie Weir, who is fighting motor neuron disease.

To stay up to date with the 2019 Laureus World Sports Awards, visit awards.laureus.com and follow @LaureusSport and #Laureus19 on social.
Posted by Blogger at 7:30 AM