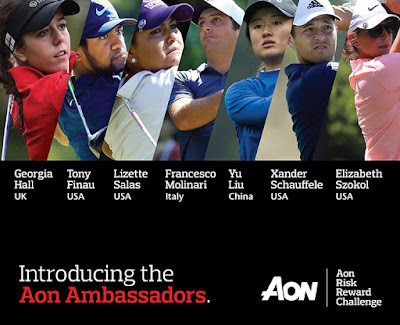 (London) – Aon plc (NYSE: AON), a leading global professional services firm providing a broad range of risk, retirement and health solutions, unveiled a diverse lineup of ambassadors who recognize the importance that data-driven insight plays in optimizing performance, as part of a multi-year relationship with both the PGA TOUR and the LPGA for the Aon Risk Reward Challenge.

“The 2019 Aon Risk Reward Challenge brings a new dimension of competition to every round we play on the PGA TOUR,” said Molinari. “It is a very exciting addition to our sport and gives fans insight into the opportunities each hole presents and approach that we take to gain an advantage.”

The season-long Aon Risk Reward Challenge will highlight the world’s best professional golfers as they tackle the most strategically challenging holes across both the PGA TOUR and LPGA schedules. The player from each Tour on top of the Aon leaderboard at the end of the regular season will each receive equal prize money of $1 million.

“As athletes we’re always looking to challenge ourselves more and more, and Aon has brought a new aspect of competition that will not only challenge us as players but will also have fans of both Tours around the world more engaged than ever before,” Hall added. “We are looking forward to what will be a rewarding and entertaining weekly competition for all.”

“We have assembled a lineup of Aon Ambassadors that reflects the global nature of our business and the importance of diversity and inclusion to our firm,” said Andy Weitz, Chief Marketing Officer, Aon. “Like our colleagues at Aon, each of these players has a unique background and a particular set of skills. We look forward to tracking their progress throughout the Aon Risk Reward Challenge and using their experiences to illustrate how we create value for our clients.”

The Aon Risk Reward Challenge ambassadors will be part of a multi-platform activation that includes broadcast integration with CBS Sports, The Golf Channel, Sky Sports UK, PGA TOUR and LPGA digital and media platforms, and the opportunity for Aon to bring clients and colleagues inside the ropes with exclusive experiences and business networking events around the world.

The Challenge will be run across regular season tournaments (36 on the PGA TOUR and 29 with the LPGA) and will be brought to life through feature segments including weekly Challenge hole profiles and insights, player interviews and on-air commentary and analysis.

The Aon Ambassador Roster
Tony Finau – 28, USA
Finau has developed into one of the best and most consistent players on the PGA TOUR by combining his prodigious power game and strategic approach with an unmatched work ethic in all areas of his game. Finau’s dedication to his family and community are his top priorities, and the PGA TOUR star is a shining example of how a combination of determination, commitment, family and faith can overcome the odds and lead to great success.

“The margin for error is very thin on the PGA TOUR,” said Tony Finau. “To compete on the world’s toughest courses, every shot we take requires critical decision-making. Aon created this program to shine a light on the data driven insights they are known for, and I couldn’t be more excited to work with them.”

Yu Liu – 23, China
The former Duke University standout completed an impressive rookie season on the LPGA in 2018 with three top-10 finishes and a string of top 25s. Liu had earned her way onto the LPGA via the developmental Symetra Tour, where she ended 2017 fifth on the money list to earn LPGA membership. Her strategic and methodical approach to the game has her primed to achieve further success in 2019.

“Aon is known all over the world, and all the players are excited about the Aon Risk Reward Challenge they created with the LPGA,” said Yu Liu. “The courses we play are among the best in the world and this program not only gives us a $1 million prize, but will feature some of the most demanding holes in golf.”

Lizette Salas – 29, USA
Salas is a respected eight-year LPGA veteran with a solid all-around game and strong will to compete who has represented Team USA at three Solheim Cups. She has demonstrated a steadfast commitment to her community where she has been instrumental in providing access to and opportunity through golf by way of a junior golf foundation based in her hometown of Azusa, CA.

“I know that I speak for all the players at the LPGA when I say how excited we are for the opportunity to compete in the Aon Risk Reward Challenge this year and how proud we are that the prize for both the LPGA and PGA TOUR winner is an equal $1 million,” said Lizette Salas. “Now that the scoring system and holes have been announced, I am looking forward to analyzing them with my team to determine our optimal game plan!”

Xander Schauffele – 25, USA
Just 25 years of age, Schauffele is one of the most analytical and meticulous players in the game, considering advantages that might be gained ranging from swing mechanics and on-course strategy, down to what kind of shoes and spikes he wears, to develop one of the most consistent all-around skill sets on the PGA TOUR.

“The Aon Risk Reward Challenge is one of the most exciting programs in golf,” said Xander Schauffele. “It puts the focus on the decisions we make and how they impact our scores and success. It also gives the fans and viewers greater insight into how to best play the designated hole each week.”

Elizabeth Szokol – 24, USA
Szokol flourished on the Symetra Tour in 2018, ending the year fourth on the money list to earn full LPGA membership for 2019. The Chicago-native and former All-American at University of Virginia will rely on her length off the tee, precise ball striking and an experienced team of advisors as she enters her rookie season.

“I am so excited about what Aon created for the LPGA players,” said Elizabeth Szokol. “This is a great time to be playing golf at the highest level and be able to compete for a $1 million prize in the Aon Risk Reward Challenge. People watch us all over the world, and sometimes wonder how we make our shot by shot decisions. We put great thought into our strategic game plan each week and this is an opportunity for fans to better understand that.”

Georgia Hall – 22, England
Hall won her first LPGA title in major style during her rookie season in 2018, claiming victory by two shots at the Women’s British Open. That breakthrough gave her a huge confidence boost and she is fast gaining a reputation as one of toughest competitors in women's golf. Hall, and her closely knit team of coaches and family are working to continue to grow her game and professional standing as she enters her second season as an LPGA member and aims to represent Europe at her second consecutive Solheim Cup.

Francesco Molinari – 36, Italy
The ultimate tactician on the golf course, Molinari credits his success to the support of his team and key insights that they have used to turn previous perceived weaknesses into some of his greatest strengths. Francesco’s precise, calculated approach to the game of golf was on full display in 2018 leading to 3 worldwide victories which included a Major win at The Open Championship and a first ever 5-0 record in the Ryder Cup.
Posted by Blogger at 6:00 AM