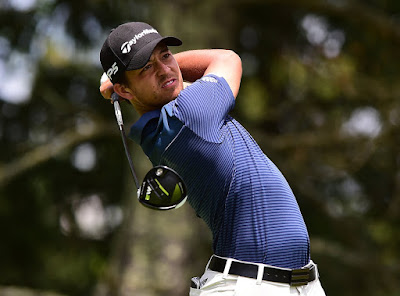 (RELEASE) - Twenty-three-year-old Schauffele continues streak of hot play to capture Greenbrier Classic for maiden PGA TOUR victory in just his 24th professional start. The win is yet another for Team TaylorMade as company's momentum on global tours surges into Summer.

What You Need To Know:
- Schauffele's victory is his first on the PGA TOUR, continuing a string of strong results for the 23-year-old rookie.
-Schauffele finished the week with a 317.8 yard average off the tee and hit more than 75% of fairways during the tournament with his 2017 M2 Driver, which he's played since the Sony Open in January. His driver is equipped with a Graphite Design Tour AD-DI 6X shaft.
-Schauffele, who put the P750s into play a week after hitting them for the first time prior to the Honda Classic, hit a remarkable 81.9% of greens in regulation, which led the field.
- Schauffele's victory is the 26th on worldwide tours for TaylorMade's new '17 drivers, far outpacing the next closest manufacturer.
- With 68 in play (43.6%), TaylorMade again dominated the driver count at the Greenbrier Classic, nearly 20% higher than the next closest manufacturer.
- Xander is now ranked 27th in the FedExCup race with 878 points after coming into the tournament ranked 94th.
- With the win, Schauffele has earned spots in the 2017 Open Championship at Royal Birkdale in addition to the 2017 PGA Championship later this year. He has also secured an invite to the 2018 Tournament of Champions, PLAYERS Championship and 2018 Masters Tournaments.