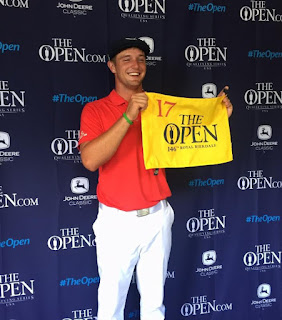 DeChambeau fired rounds of 66, 65, 70 and 65 to finish at 18 under par and win the event. His final round of 65 on Sunday included seven birdies, six of which came on the back nine, including a clutch 14 foot birdie putt on the final hole to take the lead. This victory earned him a paycheck of $1,008,000.00 and 500 FedEx Cup Points. He's now ranked 34th on the FedEx Cup Points List, and because of this victory, is headed to The Open Championship at Royal Birkdale in Southport, England.

"JumboMax would like to congratulate Bryson DeChambeau on his first victory on the PGA Tour," said John Mazzanoble, President of JumboMax Grips. "We expect that this will be the first of many wins, and we're excited to be part of Bryson's journey. He has shown everyone that there truly are new and innovative ways to play the game of golf at the highest level, whether it's using JumboMax grips or single length irons, this is an exciting time for the game of golf."

DeChambeau has been playing JumboMax Grips for more than six years now and he's as well known for his accomplishments on the golf course as he is for his unorthodox set of irons that are all the same length. DeChambeau plays the new Tour Series Grips from JumboMax that he personally helped develop.

So far this season, JumboMax has collected a victory and two second-place finishes on the PGA Tour and JumboMax Team Members, Bryson DeChambeau and Kelly Kraft have combined earnings in excess of $3 million.

For more information about JumboMax Golf Grips, visit www.JumboMax.com.
Posted by Blogger at 9:17 AM