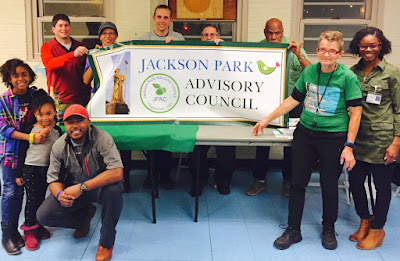 “Based on the community engagement efforts of the Chicago Park District and Chicago Parks Golf Alliance, it is the consensus of the committee to continue its support of the proposal to combine the Jackson Park and South Shore Golf Courses. The conceptual plans by Tiger Woods’ TGR Design propose features to attract recreational golfers; while also offering potential to bring marquis professional, junior and amateur events to Jackson Park. Committee members also cited noticeably increased activity among golfers of all ages at the courses during Summer 2017. The committee’s support remains conditioned upon adherence to previously stated requirements: continued open access to the public; reduced fees for Chicago residents, including discounted pricing for seniors and free golf for juniors age 17 and younger; as well as following ecological standards in construction, maintenance and operations. The committee also calls upon the Chicago Park District and Chicago Parks Golf Alliance to continue collaboration with longtime golfers and non-golfing neighborhood stakeholders as design proposals are refined. In conclusion, based upon current information, the committee reaffirms its consensus that the proposed golf course will bring prestige, status, and new economic benefits to the community and will be a major asset to Jackson Park.”

More information is available at www.jacksonparkadvisorycouncil.org and chicagoparksgolfalliance.org.
Posted by Blogger at 2:45 PM