(FRANKLIN, TN) - Since switching to a milled SeeMore ONE SS putter with a Rosemark grip six events ago on the PGA Champions Tour, Brand Jobe has become one of the hottest golfers on the planet. Jobe finished T2 at this week Senior Constellation Players Championship, firing rounds of 66-68-65-72 for a 17 under par total and finishing just one shot back. 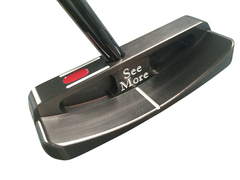 He has finished in the top 10 in four of his last five events, including back-to-back Top 3 finishes in majors, and his first win in more than 400 events on tour just four weeks ago at the Principal Charity Classic.

Jobe has earned $875,000 in his last six starts since switching to SeeMore (Rosemark), an incredible average of nearly $150k per event. And he is 61-under par in those six events, dating back to the Regions, which includes three majors. He has skyrocketed to fifth in the year long Charles Schwab Cup standings.

RST Technology - SeeMore’s patented RST, known by a visible gun sight on the top line, allows the golfer to set up the putter perfectly each and every time in relation to the intended target line. This is accomplished by lining up the black bottom portion of the shaft between two white lines and covering a signature red dot on the heel of the top line. The process is like locking radar onto a target. The two parallel white sight lines frame the shaft and serve as an indicator that the golfer is in perfect position to make a consistent and reliable stroke.

SeeMore Facts - SeeMore originally became recognized when Payne Stewart won the 1999 U.S. Open playing a SeeMore putter in the greatest final round putting performance in US Open History. The brand was re-launched in 2007, and immediately regained worldwide prominence as Zach Johnson used a SeeMore FGP to win the 2007 Masters. Zach Johnson’s historic win at the 2015 Open Championship now becomes the third leg of the “SeeMore Slam.”

SeeMore’s website at www.seemore.com has many new features about SeeMore’s remarkable legacy, technology, and tour success. SeeMore putters are custom made in Franklin, Tenn.
Posted by Blogger at 9:24 AM