(AUGUSTA, Mo.) – Mika Liu, the inaugural 2015 U.S. Women’s Amateur Four-Ball co-champion and the only USGA champion in the field, fired a 4-under-par 67 Monday to grab a one-stroke lead after the first day of stroke play in the 2017 U.S. Girls’ Junior Championship on Boone Valley Golf Club’s 6,311-yard course. 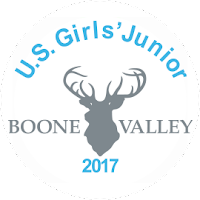 Liu, who played in the first group off the 10th tee, carded five birdies, four on her last nine holes, against one bogey on the par-4 13th hole, which ranked as the fifth-toughest hole on Monday.

“I think the course is really challenging; there were a lot of precision shots to be made today, and I think I executed a lot of them,” said Liu, a member of the 2016 USA Curtis Cup Team who combined with Rinko Mitsunaga to win the 2015 U.S. Women’s Amateur Four-Ball.

Liu, of Beverly Hills, Calif., cemented her lead by draining a 25-foot par putt on the ninth green, her 18th hole. The par-5 ninth was the longest hole on the course Monday, stretching to 525 yards.

“I was just trying to give it some good speed, and it fell in,” said Liu of her final putt. “The second shot [on the ninth hole] is a tough one because you could either lay up to the bunkers or go for it, but there really isn’t that good of a lay-up place. I went for it on the right side and ended up in the [mid-fairway] bunker.”

Set to start at Stanford University in the fall, Liu is playing in a championship record-tying seventh consecutive U.S. Girls’ Junior, joining only Megan Khang (2009-15) and Margot Morton (1954-60). If not for the United States Golf Association’s decision to increase the championship’s maximum age from 17 to 18 starting this year, Liu, who turned 18 in February, would not be competing. Including Liu, there are 33 18-year-olds in the field.

“It is amazing that I can come back when I’m 18 and also have my sister on the bag,” said Liu, whose sister, Marika, played golf at Yale. “This is her first time with me at a USGA event, and she’s been so helpful during my round. Cheering me up, making jokes, and telling me what line to go off of on my tee shot. She’s been amazing.”

The U.S. Girls’ Junior consists of 36 holes of stroke play, with the low 64 players advancing to match play, which begins Wednesday. The championship, scheduled to conclude with a 36-hole final on Saturday, is one of 13 national championships conducted annually by the USGA, 10 of which are strictly for amateurs.

Caroline Hodge and Brianna Navarrosa both carded 68s to position themselves one stroke from the lead. Navarossa, 15, who is playing in her second U.S. Girls’ Junior, finished runner-up with partner Angelina Kim in the 2016 U.S. Women’s Amateur Four-Ball. Hodge, 16, is playing in her first USGA championship.

“I’m from [Larchmont] New York, and I think that Boone Valley is a lot similar to the courses I play on a day-to-day basis,” said Hodge. “Really thick rough, pretty hilly. I’m just glad I could come here, and be playing such a beautiful course, and playing well.”

Hodge made the turn at 1 over par and finished with four birdies on her last eight holes.

“I don’t really hit it that far, so I was just trying to mainly hit greens, but I ended up getting pretty close [within 5 feet] on the second hole [her 11th] and was able to just roll it in, which boosted my confidence,” said Hodge. “Overall, I was able to read my short putts really well, and I was able to focus on where in the cup I wanted to leave it. Anything inside 10 feet, I was pretty confident with, and I just got more confident as the round went on.”

Like Liu, Hodge played in the morning wave, and her sister is also here this week. Hodge’s sister, however, is playing in the field. Alice Hodge, 14, carded a 77. The Hodge sisters join Nicole and Waverly Whiston, of San Diego, Calif., as one of the two sets of sisters in the field. The Whistons carded 70 and 78, respectively.

Navarrosa, who had the lowest score of the afternoon groups, made five birdies to two bogeys, including four birdies on the inward nine. On the par-4 18th hole, she landed her approach shot 10 feet from the hole, giving herself a chance for birdie and a share of the lead. Her putt, however, rolled less than a foot past the hole.

“I just wanted to have a solid round and make some good putts,” said Navarrosa. “I’m glad I was able to start low today, so I don’t have to catch my way up. I hit my shots really well today, and while I didn’t make all my putts for birdie, I made enough to get a good score.”

Of the three players in the field who played in the 2017 U.S. Women’s Open at Trump National Golf Club in Bedminster, N.J., two weeks ago, only Paphangkorn Tavatanakit, of Thailand, returned a score under par, a 1-under 70. So Whi Kang, of the Republic of Korea, finished with a 74, while Brooke Seay, of San Diego – the only player in the field to make the 36-hole cut in the Women’s Open – carded a 77.

After finishing 1 under, Alexa Pano, the second-youngest player and one of two 12-year-olds in the field, signed for a 71, which was reflected in the official results. The recording error was made on the 10th hole (her first), which she birdied, but signed for as a par. If she had signed for a total score lower than 70, the mistake would have been grounds for disqualification.

“I think the course is playing really tough,” said Pano, who is from Lake Worth, Fla., and playing in her second consecutive championship in Missouri following last week’s Girls Junior PGA Championship in St. Albans, approximately 45 minutes from Augusta. “It’s not necessarily long, but you’re not having short irons into many of the holes, it’s more 7 to 5 irons. So, it definitely played pretty challenging, but I managed, and had really good putting today, which saved me in a bunch of situations. Today, it [putting] was definitely the strongest part of my game, but it hasn’t been the last couple weeks.”

A total of seven sub-par rounds were recorded in what was expected to be some of the best weather conditions of the week. After temperatures in the low 100s and high 90s with high humidity for the weekend practice rounds, Monday’s high was a more comfortable 91 with light wind.

Though eligible to play, the 2015 and 2016 U.S. Girls’ Junior champion Eun Jeong Seong, 17, of the Republic of Korea, is not defending her titles this week. Seong also won the 2016 U.S. Women’s Amateur Championship, becoming the only player in USGA history to win both championships in the same year.
Posted by Blogger at 11:00 AM