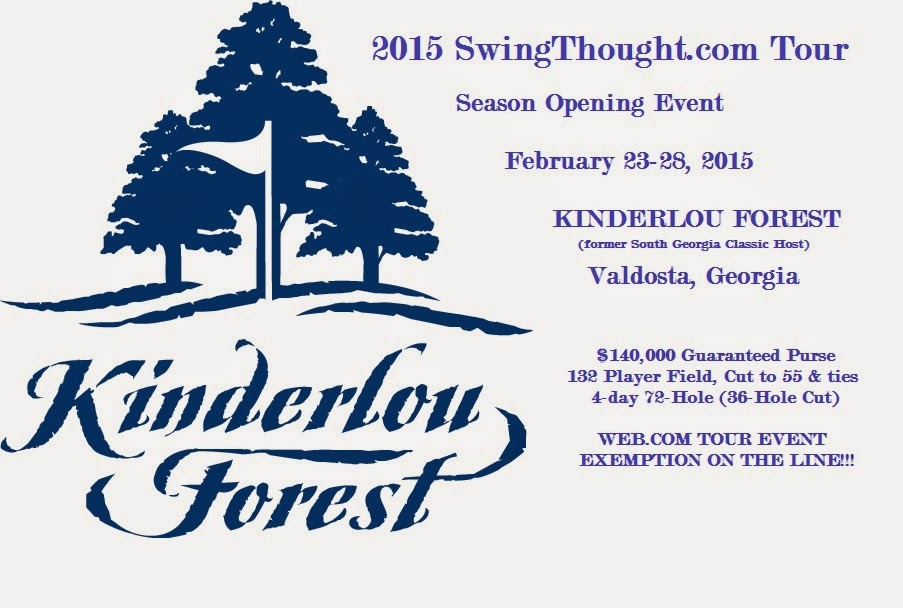 Created by Davis Love III Designs, the professional course opened in April 2004, serving as host to six PGA Nationwide Tour events and two PGA Web.com events in ten years. The South Georgia Classic was one of the largest events on the tour, with one of the richest purses on the PGA qualifying circuit. In an area known for flat terrain, the topography of Kinderlou Forest is unusual for the region. Undulating hills lend a unique element not found in southern Georgia, and the signature #4 with its deep, all natural ravine is one of the most challenging, yet beautiful, holes on the course. With five tee boxes on each hole, the course plays as short as 5,315 yards or as long as 7,781 yards.

The SwingThought.com Tour is currently taking memberships for the upcoming 2015 Pro Series set to begin in late February and continuing through to early September. The Pro Series will consist of 16 72-hole events with $140,000 Guaranteed Purses and 6 54-hole Qualifier/Q Prep events. Fields are limited to 132 players with the top 55 and ties making each cut. Also a minimum of six (6) 2015 Web.com Tour "event" exemptions will be awarded throughout the 2015 Pro Series season on a yet-to-be determined competitive basis. To join the 2015 SwingThought.com Tour Pro Series, players need only contact the SwingThought.com Tour offices at 800-992-8748 and sign up (memberships are granted on a first come first serve basis, no ranking schools or qualifiers are needed). Membership is $1500 running through January 15th and will increase to $2,000 after that date.

For more information on the new SwingThought.com Tour, visit swingthought.com or call 800-992-8748.