(Eugene, Ore.) - Jeff Wilson no longer has to answer questions about not winning a USGA championship. 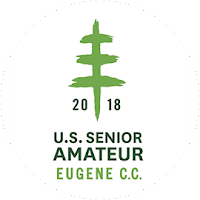 On an overcast Thursday at Eugene Country Club, Wilson, 55, of Fairfield, Calif., became the first medalist in 31 years to win the U.S. Senior Amateur Championship, claiming the 64th edition with a 2-and-1 victory over defending champion Sean Knapp, 56, of Oakmont, Pa.

Wilson played the equivalent of 4-under-par golf – with the usual match-play concessions – over the final eight holes to beat Knapp, who was vying to become the first repeat champion since William C. Campbell in 1979-1980.

“How is this his first [USGA] win?” a gracious Knapp asked rhetorically near the 17th green. “Anybody that’s played amateur golf at a high level has known Jeff Wilson. He’s a superstar. You did not see a senior golfer out there. You saw one of the best amateur golfers in the country.”

For Wilson, this was the culmination of a journey that began in the late 1970s with the U.S. Junior Amateur and progressed to four U.S. Open appearances, including 2000 at Pebble Beach, where he earned low-amateur honors. He is the only golfer in USGA history to earn medalist honors in the U.S. Amateur, the U.S. Mid-Amateur and the U.S. Senior Amateur, and earlier this summer he was the low amateur in the U.S. Senior Open, joining two-time USGA champion Marvin “Vinny” Giles III as the only competitors to earn that distinction in a U.S. Open and U.S. Senior Open.

Wilson had come close to winning USGA titles before, reaching the semifinals of the U.S. Mid-Amateur in consecutive years (2001-2002) and the quarterfinals of that championship on three other occasions. But when he turned 55 in June, he could compete in the U.S. Senior Amateur and he joined Knapp as players to have won the title in their first year of eligibility.

At 55 years, 2 months and 16 days, he is the third-youngest to win the U.S. Senior Amateur behind Stan Lee and his brother, Louis Lee.

“I think Sean said it best [at the prize ceremony], it’s really hard to win one of these things,” said Wilson, the owner of a car dealership. “First you’ve got to get over yourself and then you have to beat the guy playing with you. And it’s difficult.

“I always thought I was good enough to be a USGA champion, but I never work put the work in. And that shows up when the matches are on the line. This year, I put the work in.”

Enjoying as much as a 30-yard advantage off the tee, Wilson took advantage of that power on the two second-nine par 5s at Eugene, nearly reaching both in two. He won the 13th to go 1 up and after winning the par-4 14th when Knapp three-putted, Wilson’s second shot from the right rough on the 522-yard 16th hole stopped 5 yards short of the green. With Knapp already inside 4 feet following a perfect wedge approach, Wilson eschewed his wedge and putted the ball from the fairway. It came up 9 feet short, but he managed to convert the birdie putt to maintain his 2-up lead.

On the 17th hole, both players hit their wedge approaches within 12 feet of the flagstick. When Knapp’s birdie attempt drifted past the hole, all Wilson had to do was cozy his birdie putt to within concession range, which he did to take the title.

QUOTABLE:
Jeff Wilson, of Fairfield, Calif., on his overall performance:
“Holes 4, 5, 6, 7, there was a stretch of holes in there on the front nine where I was pretty scrappy, and I just tried to get myself to settle down and not think ahead and just keep hitting shots, and I played a pretty good back nine. I was 4 under for the last eight holes or something like that.”

Wilson on getting a featured pairing in the 2019 U.S. Senior Open with reigning champion David Toms and Senior British Open champion Miguel Angel Jimenez:
“Oh, that’ll be really cool, but I was already in it, so can I just take my normal time?”

Wilson on how playing in the recent U.S. Amateur at Pebble Beach helped him prepare for this championship:
“The U.S. Amateur was really eye-opening for me because I can’t practice like those kids do, but I sat on the range and I watched these kids, and they hit it hard, and there’s no real thought of the result afterward. So, I watched the way they play, and I just go, ‘I can do that.’ And that’s kind of the way they play. They hit it really hard, and then they go run it down. And I said, you know, there might be something to that.’”

Sean Knapp, of Oakmont, Pa., on his mindset after going 1 up after nine holes:
“He comes right back at 10 [with a birdie], I come right back at 11. We were playing great golf. I make a great save on the next hole (No. 12). What is there to say? Sometimes you lose. I don’t think that there’s any offense to that. You know, how many players do you take in this situation and this environment under this course setup and tell them, take even par, 1 under around here and then you lose, 2 and 1? I think that’s more of a testament to Jeff. I gave him what I could give him today. I wasn’t as tight, but I was pretty tight. I think all the credit goes to him.”

Knapp discussing if he heard from several of his friends, including five-time USGA champion Nathan Smith, prior to the championship match:
“Not enough people (smiling). I needed to hear from higher powers in order to win this match, and I think I heard from that, but it just … wasn’t meant to be today.”

Knapp summing up his experience this week, improving to 11-1 in match play over his two Senior Amateur appearances:
“Well, I’m very thankful. I’m blessed, and this has been a year that’s been great. You know, I’m going to get to do some great things next year. Maybe not as many as Jeff will. But I don’t have any regrets. You know, sure, it’s a little painful. It hurts right now. I’m not happy and all that stuff. But at the end of the day, I just look at golf, and I’ve seen enough golf, and sometimes you lose and sometimes you’re beaten, and I was beaten today, and all the credit to Jeff again.”

NOTABLE:
Runner-up Sean Knapp received a silver medal and exemptions into the 2019 U.S. Senior Open, the 2019 U.S. Amateur and next month’s U.S. Mid-Amateur.

This was the fifth USGA championship hosted by Eugene Country Club. Four times, the medalist or co-medalist has advanced to the championship match. The 1993 U.S. Mid-Amateur, won by the late Jeff Thomas, is the only instance in which the medalist failed to reach the final. Medalist Johnny Miller won the 1964 U.S. Junior Amateur, Amanda Blumenherst won the 2008 U.S. Women’s Amateur and now Jeff Wilson has won the U.S. Senior Amateur. Co-medalist Ellen Port lost in the 2002 U.S. Women’s Mid-Amateur final to Kathy Hartwiger.

Before Thursday’s final, John Richardson had been the last medalist to win the U.S. Senior Amateur, doing so at Saucon Valley Country Club in Bethlehem, Pa. His son, Kemp Richardson, later won titles in 2001 and 2003, making them the only father-son tandem to win a USGA championship.

Jeff Wilson’s 84-year-old father, Jack, took a break from a fly-fishing trip on the nearby McKenzie River in Oregon to watch his son play the final match.

Wilson’s caddie this week was childhood friend Bobby Periera. In a bit of irony, Pereira was wearing a Pittsburgh Steelers cap, which happens to be the team Knapp roots for. Knapp resides in the Pittsburgh suburbs.
Posted by Blogger at 3:54 PM