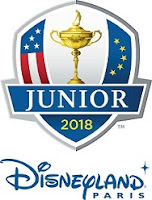 “We are proud to bring a formidable United States Junior Ryder Cup Team to Disneyland Paris, to compete against our friends and counterparts from Europe next month,” said Wronowski. “The United States is well represented with some of the finest playing junior golfers in America. We are excited to come to France for this wonderful, biennial celebration of golf and goodwill.”

Highlighting each of the 12 players who have earned spots on the 11th United States Junior Ryder Cup Team:

Ricky Castillo, 17, Yorba Linda, California – Castillo, the No. 3 ranked boys player overall, is the 2018 AJGA Heather Farr Champion. In 2017, he advanced to the round of 32 in the U.S. Amateur; and the round of 16 in the U.S. Junior Amateur. Castillo finished fourth in the 2018 U.S. Junior Ryder Cup standings. He is a University of Florida commit.

Michael Thorbjornsen, 16, Wellesley, Massachusetts – Thorbjornsen, the No. 8 ranked boys player, captured the 2018 U.S. Junior Amateur at Baltusrol Golf Club, which clinched an automatic spot on the U.S. Junior Ryder Cup Team. With the win, he also earned exemptions into the 2018 U.S. Amateur and 2019 U.S. Open at Pebble Beach. A contestant in the 2018 Wyndham Cup, he also finished T-5 in the 2017 Rolex Tournament of Champions. Thorbjornsen also won his age group (14-15) at the 2016 Drive, Chip & Putt Championship at Augusta National Golf Club. Thorbjornsen finished third in the U.S. Junior Ryder Cup Points Standings.

Canon Claycomb, 16, Bowling Green, Kentucky – Claycomb is the 2017 PING Invitational champion and a member of the 2017 Junior Presidents Cup Team. He competed in the 2018 Australian Amateur. Claycomb is committed to the University of Alabama for the Class of 2020. He finished second in the U.S. Junior Ryder Cup Standings and was 3rd at the 2018 Boys Junior PGA Championship. Claycomb is currently ranked No. 16 overall among boys.

William Moll, 17, Houston - Moll is the 2017 Jones Cup Junior Invitational Champion. He finished in second place in the 2017 UIL 6A Texas High School State Championship. He also had a 5th place finish at the 2018 Texas Amateur. Moll finished fifth in the 2018 U.S. Junior Ryder Cup standings.

Cole Ponich, 18, Farmington, Utah - A 2017 Rolex Junior All-American 2nd Team Member, Ponich has won both the 2018 Utah State Junior Amateur Match Play and the 2017 Bobby Chapman Invitational. He recorded a hole-in-one at the 2018 Boys Junior PGA Championship during the final round. He finished sixth in the U.S. Junior Ryder Cup standings and was selected as a Captain's Pick by PGA Past President and United States Junior Ryder Cup Captain Allen Wronowski.

Girls
Lucy Li, 15, Redwood Shores, California - By earning the most points on the girls side of the 2018 U.S. Junior Ryder Cup Standings, Li will be playing on her second U.S. Junior Ryder Cup Team. The No. 1 ranked girls player overall, Li was the youngest player ever to play in the U.S. Women's Open, when she competed at age 11. She was also the youngest competitor in the 2018 U.S. Women's Open at age 15. In 2017, Li won the ANA Junior Inspiration, PING Invitational and Rolex Tournament of Champions. She was the first 15-year old named to the Curtis Cup Team since Lexi Thompson. The 2016 Girls Junior PGA Champion, Li also won the 10-11 age group at the 2014 Drive, Chip & Putt Championship at Augusta National Golf Club.

Rachel Heck, 16, Memphis, Tennessee - The 2018 Kathy Whitworth Invitational winner also won the 2017 Rolex Junior Girls Championship and all three matches in the 2017 PING Junior Solheim Cup. She made the cut at the 2017 U.S. Women's Open, while paired with Lexi Thompson. Heck, who is the No. 5 ranked girls player overall, finished fourth on the Junior Ryder Cup points list. She is committed to Stanford University.

Erica Shepherd, 17, Greenwood, Indiana – Shepherd, the No. 7 ranked girls player, won the 2017 U.S. Girls' Junior Championship. She was also a member of the 2017 Ping Junior Solheim Cup. In 2018, she was a semifinalist in the U.S. Women's Four-Ball. Shepherd was fifth on the points list. She is committed to Duke University.

Alexa Pano, 14, Lake Worth, Florida – Pano, the No. 9 ranked girls player, was selected as a Captain's pick to the 2018 Junior Ryder Cup Team by PGA Past President and Team Captain Allen Wronowski. Pano was runner-up in the 2018 U.S. Girls' Junior Championship and competed in both the 2018 LPGA Thornberry Creek Classic and 2018 Symetra Tour Four Winds Invitational. A two-time Drive, Chip & Putt Championship age group winner, Pano was also featured in the golf documentary "The Short Game," after competing in the 7-8 year old division of the U.S. Kids Golf World Championship at Pinehurst Resort. The film was produced by Justin Timberlake and Jessica Biel.

Rose Zhang, 15, Irvine, California - The 2017 Girls Junior PGA Champion, Zhang was runner-up in 2018 to Noh. With her second place finish in the 2018 Girls Junior PGA Championship, Zhang clinched an automatic bid on the U.S. Junior Ryder Cup Team. The winner of the 2018 ANA Junior Inspiration, Zhang was also a 2017 First Team Rolex Junior All-American. As well, she made the cut in the 2018 ANA Inspiration. Zhang, who is ranked No. 11 among girls, finished third on the Junior Ryder Cup points list.

The idea for the Junior Ryder Cup came about in 1995, when a team of Europeans played an informal exhibition match against the Central New York PGA Section and area juniors. Two years later, the Junior Ryder Cup was formally introduced as an event in its own right, while played at Alcaidesa Links Golf Course, in Cadiz, Spain, and won by America, 9-7.

The United States captured the 2016 Junior Ryder Cup at Interlachen Country Club in Minnesota, 15 1/2 to 8 1/2. A total of 10 players from the 2016 U.S. Ryder Cup Team are slated to be on NCAA Division I college golf rosters for the 2018-19 school year. Meanwhile, 2016 U.S. Team Member Norman Xiong, who received the Jack Nicklaus Award as 2018 NCAA Division I National Player of the Year, just turned professional.

For more information on the Junior Ryder Cup, visit JuniorPGAChampionship.com, Junior.RyderCup.com or call PGA Headquarters at (561) 624-8400.
Posted by Blogger at 11:08 AM