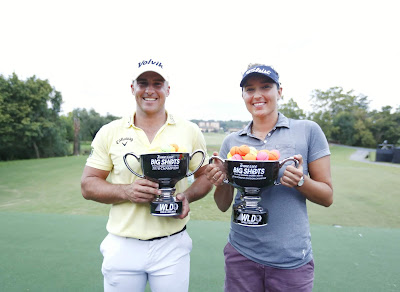 Tubert – an LPGA Tour player with conditional status – eclipsed Alexis Belton (Ruston, La.) in the Women’s Division final with a 322-yard drive on her fifth ball of the set in her first-ever World Long Drive competition. The Southern California native won’t have much opportunity to celebrate her first WLDA victory, as she’s planning to hit the road at 3:30 a.m. ET on Tuesday morning to drive straight to Indiana where she’ll squeeze in a practice round ahead of rejoining her LPGA Tour peers for the Indy Women in Tech Championship beginning on Thursday.

“There’s no rest for the weary,” Tubert said following her win. “This has helped me free up my swing. I’ve battled my demons, it’s been a rough year. But this was so much fun.”

On the men’s side, despite a successful year by many standards with multiple quarterfinal and semifinal appearances to-date, James ended his winless drought that dated back to the 2017 Volvik World Long Drive Championship; the same place where he’ll look to defend his title three weeks from Tuesday. James’ 396-yard blast in the final match was enough to get past the 393-yard drive of Kyle Berkshire (Orlando, Fla.).

“I just like to win,” James said following his first win of the season. “The people around me are really the story. That’s the reason I’m able to do what I do. I’m just an experiment. It’s always good to have a new venue like this. It’s the best crowd we’ve had all year, and I can’t wait to be back.”

“This is the reaction we’ve been waiting for all season from Justin James,” said Jonathan Coachman, play-by-play host for World Long Drive Association events on Golf Channel. “There is no need to apologize when you have emotion in this sport.”

The Tennessee Big Shots marks the penultimate WLDA competition of the year, with the season-culminating Volvik World Long Drive Championship taking place Aug. 30-Sept. 5. Golf Channel will showcase the conclusion of the World Championship live and in primetime under the lights beginning at 9 p.m. ET on Tuesday-Wednesday, Sept. 4-5, from WinStar World Casino & Resort on the Oklahoma/Texas border.
Posted by Blogger at 2:31 PM