(Philadelphia, PA) – The award-winning GolfTalk Live radio show is returning to Myrtle Beach once again for a special week of coverage from the 35th World Amateur Handicap Championship. 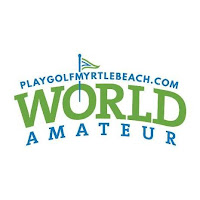 Show host Tony Leodora will do a special preview show of the world’s largest golf tournament on Saturday, August 25. Special guests will look ahead to the exciting week of action for more than 3,000 golfers, playing on 60 area golf courses.

Beginning Sunday, Leodora will be posting the entertaining first-person confessions of his week of play in the World Am. The stories – complete with all of the gory details – will be posted in the Blog Section of the radio show’s website, www.golftalklive.net. As always, Leodora encourages some of the other championship competitors to comment on his recounting of the action.

The following Saturday, September 1, GolfTalk Live will air its special wrap-up show of the week’s activities. There will be special guests from the World’s Largest 19th Hole, the nightly bash in the Myrtle Beach Convention Center. And, of course, there will be an interview with the eventual champion, recorded greenside at the finish of the final round at the Dye Club at Barefoot Resort.

“I haven’t been to all 35 World Amateur Handicap Championships,” admits Leodora. “But I have been to at least half of them. It is the most fun-filled week of golf in the year.

“I used to come to Myrtle Beach with aspirations of winning my flight, competing in the championship round against other flight winners, and maybe even hoisting the championship trophy. Now, my goal is to complete all four rounds. Call it a case of diminished expectations.”

About GolfTalk Live
The GolfTalk Live radio show is the award-winning weekly radio show that has won national awards for 10 consecutive years and three times was named No. 1 Golf Radio Show in America by the International Network of Golf at the PGA Merchandise Show. The show airs 52 weeks a year from 7 to 8 a.m. and 7 to 8 p.m. each Saturday on flagship station WNTP 990-AM in Philadelphia and on wntp.com.

The show also is syndicated on other stations, including its first affiliate -- WOND 1400-AM in Atlantic City. It airs there at 3 p.m. every Saturday. GolfTalk Live also airs on the FM dial at 10 a.m. Saturdays on Lansdale, PA's WNPV 98.5 FM and 1440 AM serving Montgomery County, Bucks County and the Lehigh Valley.  The show took another leap forward when it was added to the daily lineup on TheGolfDirector.com. GolfTalk Live also can be heard any time following each show on its official website, golftalklive.net.
Posted by Blogger at 11:03 AM