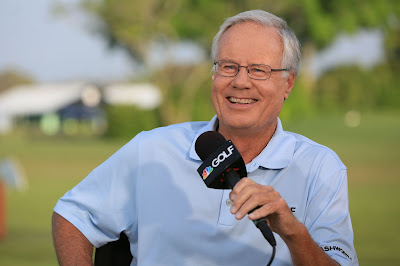 (ORLANDO, Fla.) – Longtime Golf Channel / NBC Sports golf analyst Mark Rolfing is set to return to the broadcast team at the Hyundai Tournament of Champions in Kapalua, Maui, Hawaii, Thursday-Sunday, Jan. 7-10. In August, Rolfing was diagnosed with a rare form of salivary gland cancer and took a leave of absence following the PGA Championship for surgery and treatment.

Rolfing, who lives in Maui, will serve as a tower analyst for the first two PGA TOUR events in 2016 – the Hyundai Tournament of Champions (comprised of PGA TOUR tournament winners in the 2014-15 PGA TOUR season) and the Sony Open in Hawaii, the first full-field event in 2016 (Thursday-Sunday, Jan. 14-17). He also will work the kickoff event for 2016 PGA TOUR Champions season, the Mitsubishi Electric Championship at Hualalai, (Thursday-Saturday, Jan. 21-24), and will contribute to Morning Drive and Golf Central throughout the three-week stretch.

“Debi and I would like to thank everyone for their overwhelming support during these past several months, including our Golf Channel and NBC Sports family, friends in the media, players and fans,” said Rolfing. “The medical staffs at the University of Chicago and MD Anderson Cancer Center in Houston have been amazing. I’m excited to rejoin my colleagues in January in welcoming the PGA TOUR back to Hawaii.”

“Mark has been an incredible asset to Golf Channel and NBC’s broadcast teams for many years, and we are grateful to the tremendous work he and his team of doctors have put forth over the past six months during his treatment and recovery,” said Molly Solomon, Golf Channel executive producer. “We are all excited to see him in January doing what he does best – calling golf and giving viewers an inside look into his beloved state of Hawaii.”

Coming off the historic year in 2015 with young stars Jordan Spieth, Rory McIlroy, Rickie Fowler, and Jason Day dominating the storylines, Golf Channel and NBC will capitalize on the tremendous momentum on the PGA TOUR in 2016 with Golf Channel adding its first men’s major championship coverage and The Open returning to broadcast television on NBC; golf’s return to the Olympics with live coverage of both the men and women on Golf Channel and NBC from Rio de Janeiro, Brazil; and domestic coverage of the 2016 Ryder Cup from Hazeltine National Golf Course in Chaska, Minn.
Posted by Blogger at 10:08 AM