(Boston, MA) - Bette & Court announced the addition of LPGA Tour Member Ashlan Ramsey in an effort to grow its team of sponsored athletes. As part of the 2-year partnership, Ramsey will wear Bette & Court apparel on tour, and will be featured in marketing campaigns for the brand beginning in January 2016. 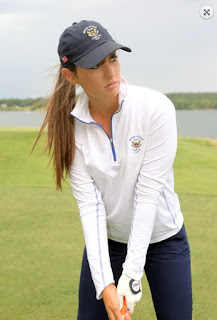 "I'm proud to represent Bette & Court as an ambassador. I enjoy the combination of exciting designs and new fabric innovations. Partnering with Bette & Court is a great fit because being comfortable and confident in what I am wearing will help me play at my best," said Ramsey.

Ashlan was the top ranked amateur in the world according to Golfweek from August of 2013 to the summer of 2014. She was named first-team All-ACC selection as a freshman at Clemson University. She was named to 2014 United States Curtis Cup Team and she posted a 1-1-1 record leading the US team to victory in summer of 2014. Ashlan was one of 10 candidates for the Annika award Watch List.

"Bette & Court has a rich history in advocating for women in the sport of golf, and we're excited to continue that tradition by signing Ashlan to our team. Signing Ashlan is a special moment for the brand, as we're re-focusing our efforts to further empower female athletes. Ashlan's incredible work ethic, dedication and competitive spirit make her the perfect fit for our team," says Melissa Raynor, Marketing Manager for Bette & Court.

For more information about Bette & Court and Sport Haley please visit bette-court.com and SportHaley.com.
Posted by Blogger at 5:14 PM