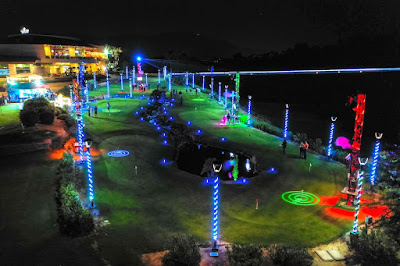 With opening of ‘Shots in the Night’ and new utility patent, California-based technology brand is poised to impact future participation

(Santa Ana, Calif.) – When NextLinks CEO Dave Shultz joined the golf business nearly four years ago, he brought a fearless ingenuity honed on avionics and aerospace engineering projects like the development of Boeing’s 787 aircraft. With his full attention now on NextLinks (a leading golf brand using technology to create interactive golf gaming experiences) and boosting golf’s stagnating participation numbers, Shultz’s innovative side is beginning to turn heads in and beyond the golf industry.

With the successful October launch of “Shots in the Night” at Indian Wells Golf Resort (Indian Wells, Calif.), golfers have a new place to sample the creative golf games powered by NextLinks’ proprietary software. Every Thursday through Saturday night, the picturesque seven-green Putting Experience at Indian Wells is illuminated with colored lasers that project an entertaining array of NextLinks putting games like Golf Horse, Golf Darts, Golf Shuffleboard, Golf Beer Pong and Golf Corn Hole, as well as competitive longer format games like Around the World and the Signature Short Game Challenge.

Alongside DJ-spun music, a full-service outdoor bar, a chef-curated food truck operation and a driving range adorned with 20-ft inflatable, glow-in-the-dark targets that react with lights and sound effects when struck by glow-in-the-dark golf balls, NextLinks is making golf fun and accessible to the Coachella Valley guests and residents.

From a business perspective, “Shots in the Night” enables Indian Wells to do something unprecedented—make revenue on golf after the sun goes down. Projected revenues for the project’s first year of operation are expected at about $700,000. For a property that was previously shutting off the cash register at sunset, that’s big news.

“We’re already seeing the magic of this project realized as families where Dad is a serious low-handicap golfer and Mom and the kids who’ve never teed it up are playing these games together and having the same amount of fun,” says Shultz. “At first glance, Golf Beer Pong (with ten lighted targets arranged in a triangle like bowling pins) might look like a novelty, but a veteran golfer soon realizes that’s ten different putts he’s practicing that break 10 slightly-different ways. His kids love the competitive gaming aspect, he loves the putting drill!”

The NextLinks gaming system and technology was originally designed for indoor applications like golf simulators at a variety of entertainment centers but Indian Wells could very well be the first of many traditional golf operations that use NextLinks to supercharge their earning capacity.

Shultz was also recently awarded a utility patent from the United States Patent Office for his software gaming and laser-light technology that seamlessly blends simulator play with short game and putting on pre-existing or realistic synthetic greens custom-built for the locations where they’re installed.

“Our whole ambition is to capture the experience for non-golfers— kids, gamers, women, party goers-- of playing on a world-class golf course on a picture-perfect day,” Shultz says. “To engineer that solution, we’ve had to do what great chefs do and serve up the best aspects of a transcendent round of golf in a ‘deconstructed’ manner. We don’t force people to bomb drives or hit 200-yard targets. We start with attainable, fun skills that get people hooked. For the Patent Office to validate our work says we’re first-in-class in some areas but we’re really just beginning to show the world how golf can unite and inspire something special. Stay tuned!”

In a golf industry eager for projects that grow participation as well as the bottom line, NextLinks is poised to grow into one of the game’s most dynamic influencers and catalysts for growth.

Presently, Shultz and the NextLinks team are invested in a project that he says will be the “most immersive golf gaming experience ever seen.” The basic platform of the project, which is scheduled to debut coincidental with the 2019 Masters Tournament, is built on the NextLinks platform of simulator golf tied to short game and putting play in one venue, but all other details are top-secret.

The NextLinks golf experience is powered by its proprietary skill differentiated games and Pinpoint Spotlight Technology. The system simultaneously tracks multiple players’ places in various games while guiding them through play with colored lasers projected on to the green.

Visit www.nextlinks.com to inquire about bringing "Shots in the Night" or a similar private label gaming experience to life at your venue.
Posted by Blogger at 10:04 AM