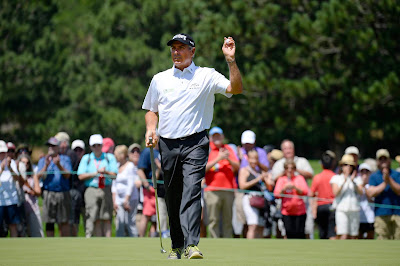 (LONDONDERRY, NH) – ECCO – a leading manufacturer of innovative footwear – has announced the renewal of their partnership with golf legend and World Golf Hall-of-Famer, Fred Couples.

Couples’ performance in the 2010 Masters tournament while wearing ECCO’s pioneering GOLF STREET launched the Hybrid golf shoe category to the world, and the American will continue to wear the brand’s innovative shoes and sport the ECCO Golf logo on the left of his headwear as a result of the multi-year extension.

“I honestly can’t imagine competing in any other shoes,” said Couples. “ECCO Golf have been a big part of my journey for over a decade and I’m ecstatic to be partnering with them for the foreseeable future.”

The Golf Digest certified “Coolest Golfer of all Time” has enjoyed a stellar career worldwide, notably winning the 1992 Masters Tournament and the 1984 and ’96 PLAYERS Championship. Having joined the Champions Tour in 2010, he has taken his total career win tally to 62 and claimed two further major championships at the SENIOR PLAYERS Championship ’11 and the Senior Open Championship ’12.

“Fred has been an amazing ambassador for our brand for over a decade,” said Jesper Thuen, responsible for global golf sponsorship for ECCO Golf. “He’s an incredible golfer, a legend of the game and we’re very proud to be able to continue such a successful partnership together.”

For more information: www.eccousa.com.
Posted by Blogger at 11:00 AM