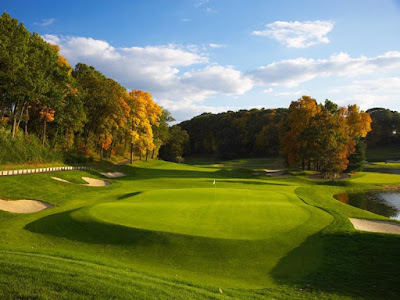 (PONTE VEDRA BEACH, Florida) – An outstanding field will compete again this year at the Travelers Championship, being played June 21-24, 2018, at TPC River Highlands, a private golf club in Cromwell, Ct., which was redesigned by Bobby Weed in 1989 in consultation with former PGA Tour players Howard Twitty and Roger Maltbie. In addition, in 2016 Weed worked in conjunction with PGA Tour Design Services on a course-wide bunker renovation at TPC River Highlands to update the strategy, based on ShotLink data, and to improve playability and maintenance.

“TPC River Highlands, overlooking the Connecticut River, offers players a variety of half-par holes with an exciting four-hole finish in an amphitheatre setting like no other,” said Weed. “This year’s tournament features one of the strongest fields ever, which is a testament to the golf course, fan base, strength of sponsor and event charities.”

Defending champion Jordan Spieth, whose dramatic victory over Daniel Berger last year came on the first hole of a sudden-death playoff, is joined by a top-tier list of players, including Brooks Koepka, winner of the 2017 and 2018 U.S. Opens, and Patrick Reed, this year’s Masters champion.

Some of the other notable names in this year’s field at the Travelers Championship include Jason Day, Rory McIlroy, Jim Furyk, Bubba Watson, Webb Simpson, Patrick Cantlay and FedEx Cup titleholder Justin Thomas.

Operated by the PGA Tour, the 18-hole par-70 TPC River Highlands has been the venue for the tour’s annual Travelers Championship, previously known as the Buick Championship and the Greater Hartford Open, since 1984.

For more information on Bobby Weed Golf Design, see www.bobbyweed.com.
Posted by Blogger at 11:20 AM